I am writing a personal blog post about my most recent Panama trip. A more scientific summary will follow soon through RCN’s website about evolution in changing seas.

I flew to Bocas del Toro on November 27th to finalize our workshop preparations with the two co-organizers Matthieu Leray and Jarrod Scott at STRI (Smithsonian Tropical Research Institute). We took care of the last logistical preparations and rehearsed our presentations. Ben Yuen from the Petersen lab in Vienna also arrived early and helped us with the workshop preparations. He also joined me on my hunt for lucinid clams. 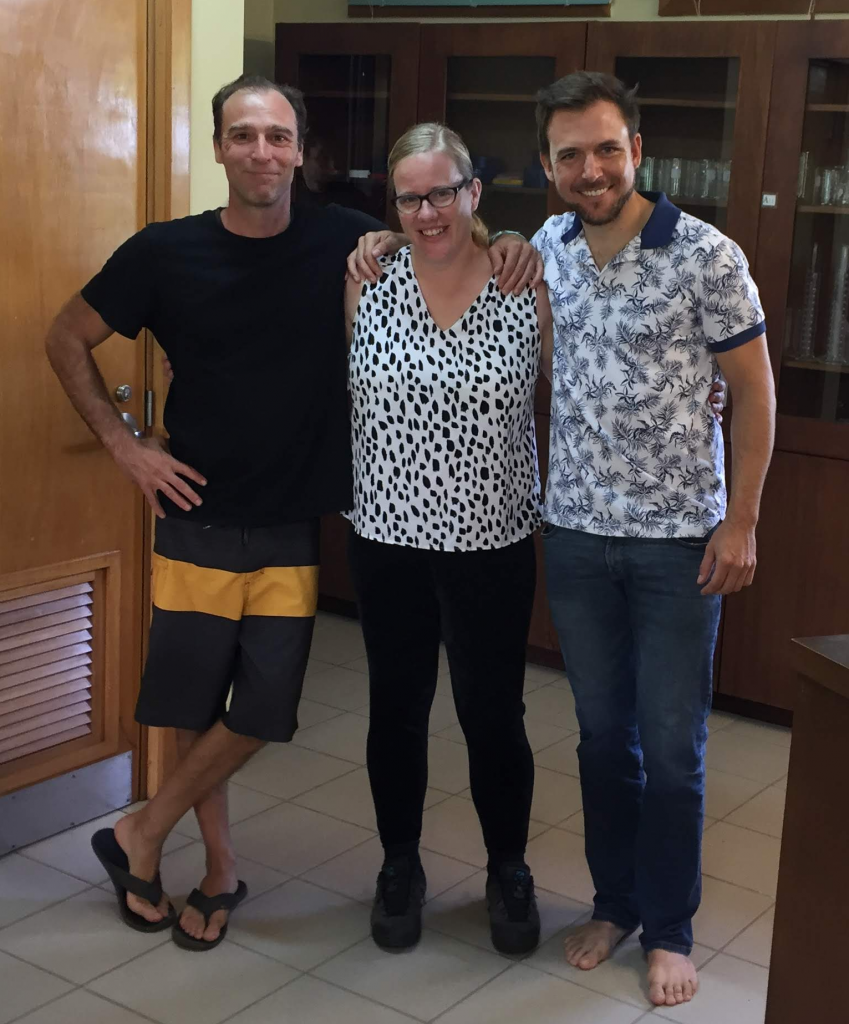 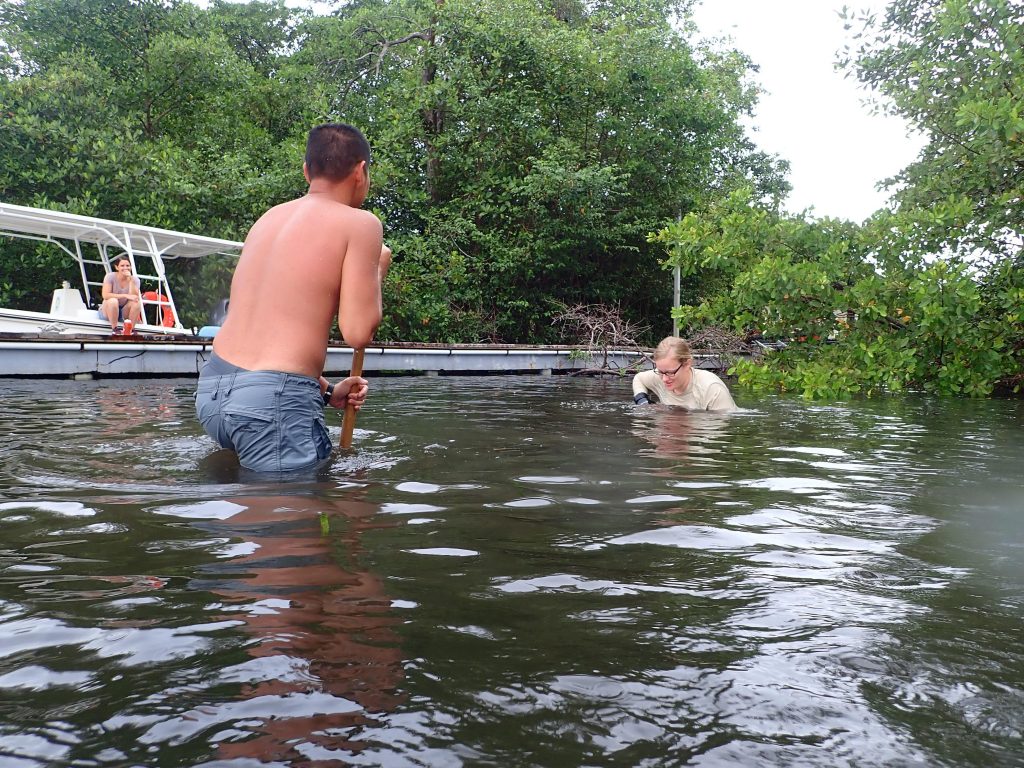 Maggie Sogin @MaggieSogin is giving us mental support. And it helped!

Ben and I searched all over the Bocas del Toro archipelago for Codakia, Ctena and Clathrolucina species. These are clams that live in seagrass. They have bacterial symbionts  in their gills that are able to oxidize sulfide. The clam filters water that is rich in sulfur through its gills. The endosymbiont bacteria are able to use these compounds to fix carbon. This carbon is then used as nutrients for its host – the clam. Seagrass beds are very rich in sulfides and lucinid clams have evolved a three-way symbiosis with seagrass and their bacterial endosymbionts. Because of the lack of oxygen in coastal marine sediments, dense seagrass meadows produce sulfide-rich sediments by trapping organic matter that is later decomposed by sulfate-reducing bacteria. The lucinid-symbiont holobiont removes toxic sulfide from the sediment, and the seagrass roots provide oxygen to the bivalve-symbiont system. 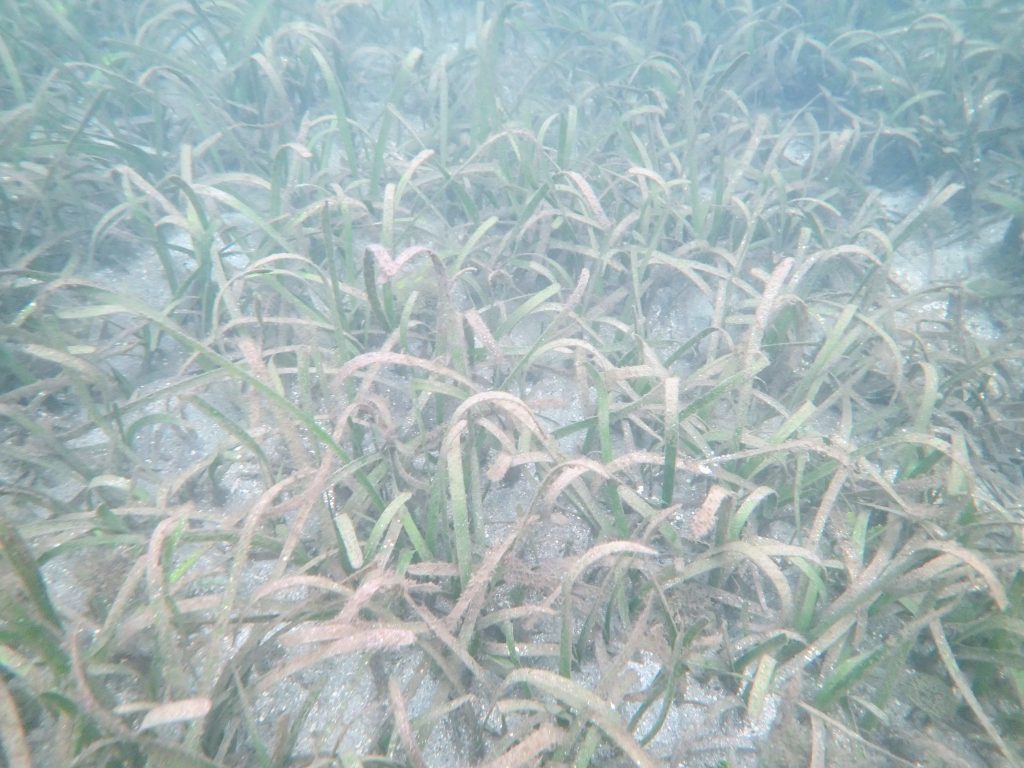 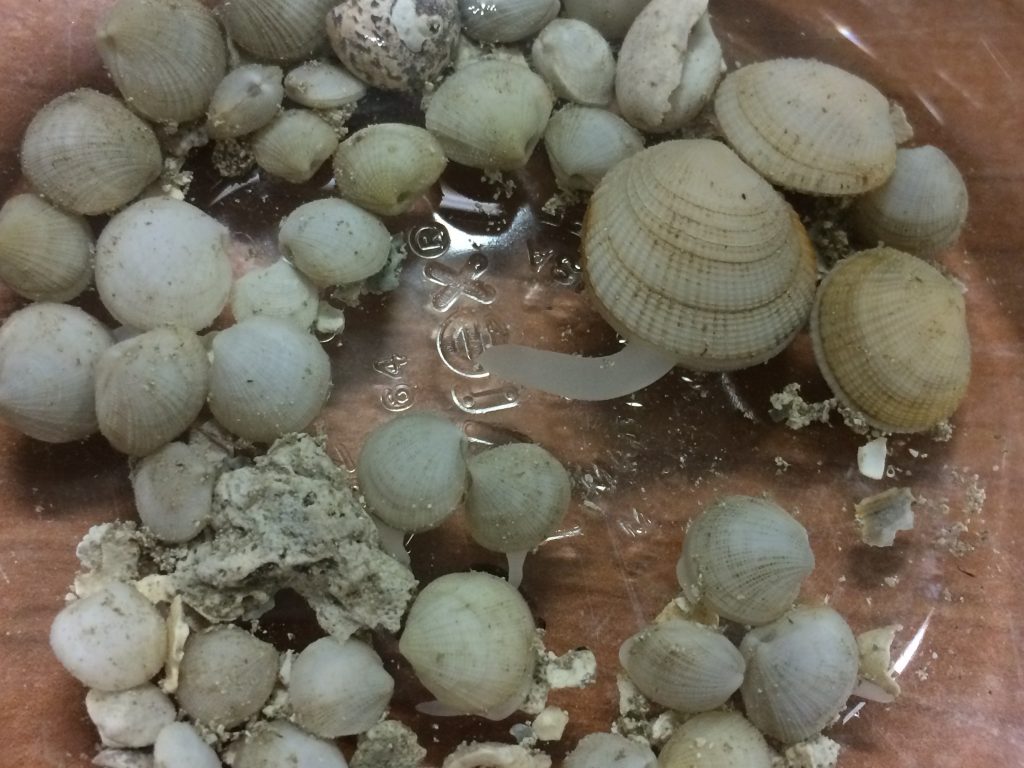 Funded by the Gordon and Betty Moore foundation, I am studying how this symbiosis evolved after the rise of the isthmus of Panama. I am also looking at patch effects and comparing local populations on both sides of the isthmus. My project is based on population genetic and coalescent theory. I am collaborating with ecologists in Vienna – the Petersen lab, and at Stony Brook University – the Peterson lab!

Ben and I found a valuable set of clams before, during and after the workshop! 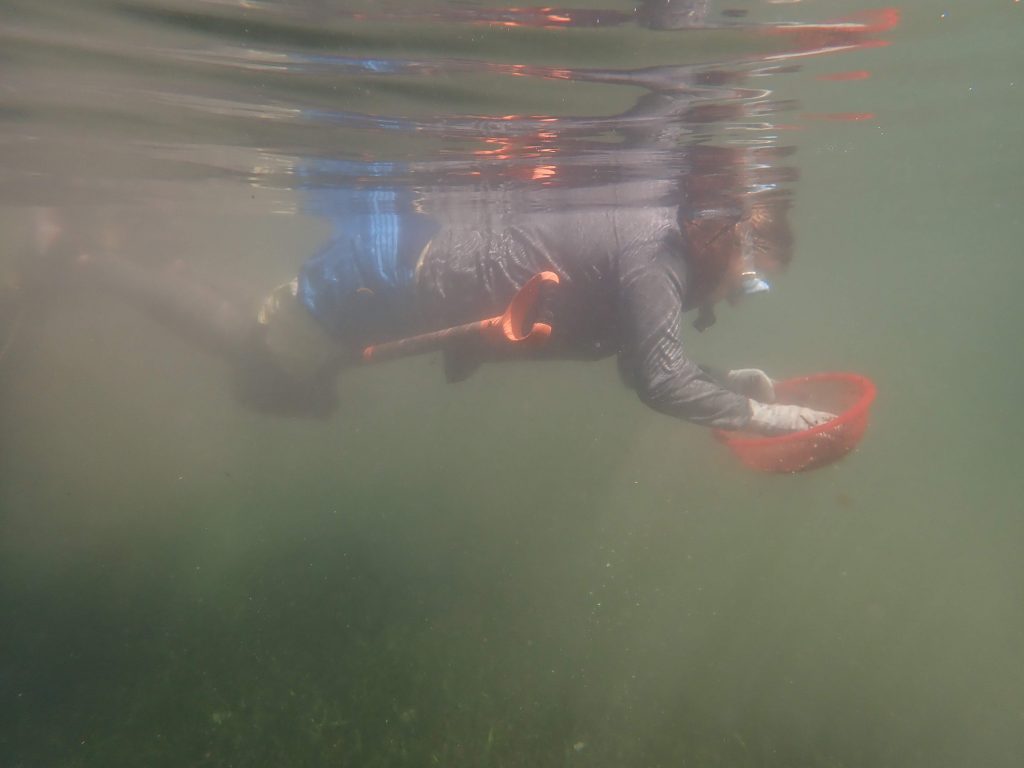 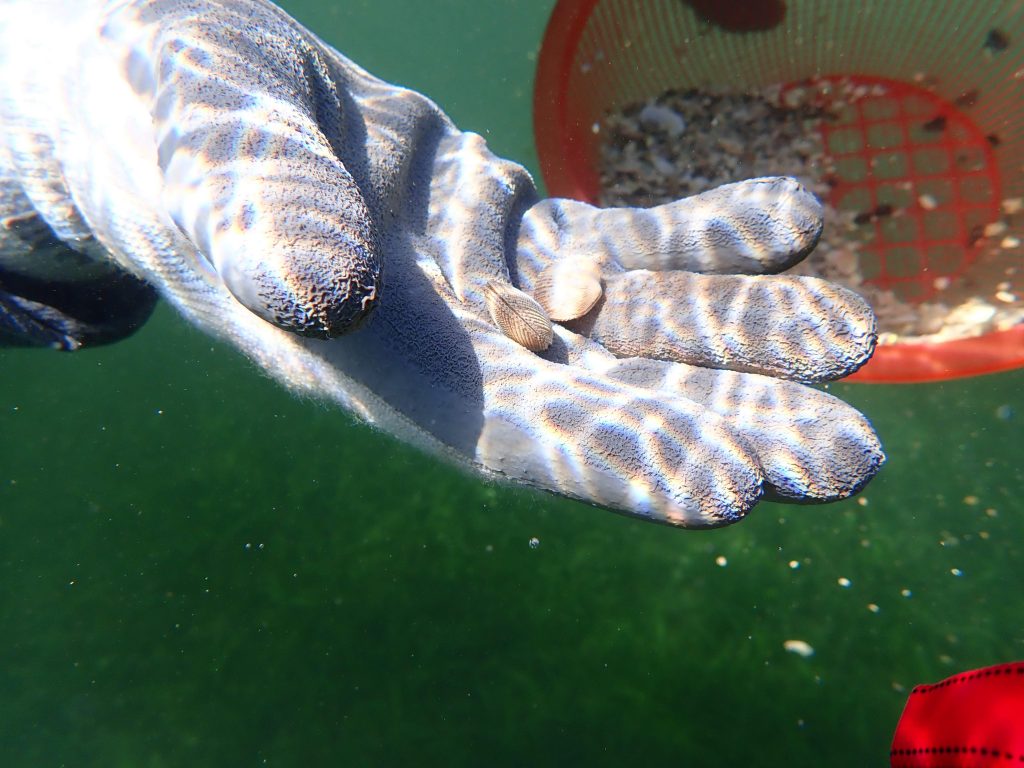 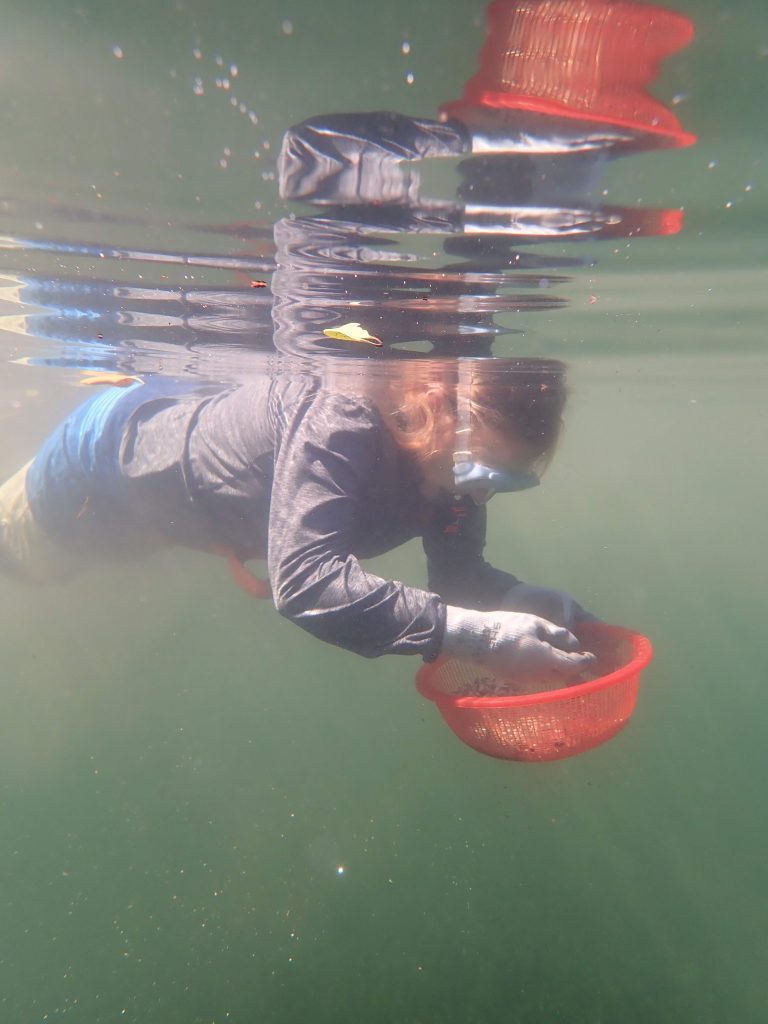 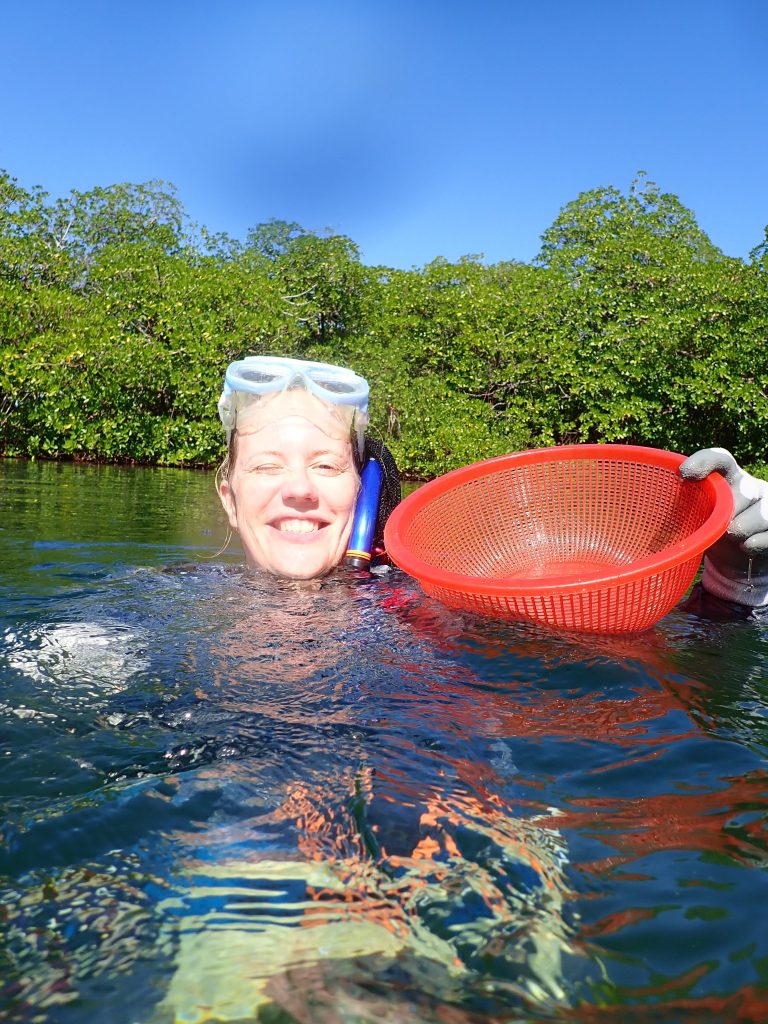 We are being stalked by Jonathan’s underwater drone! 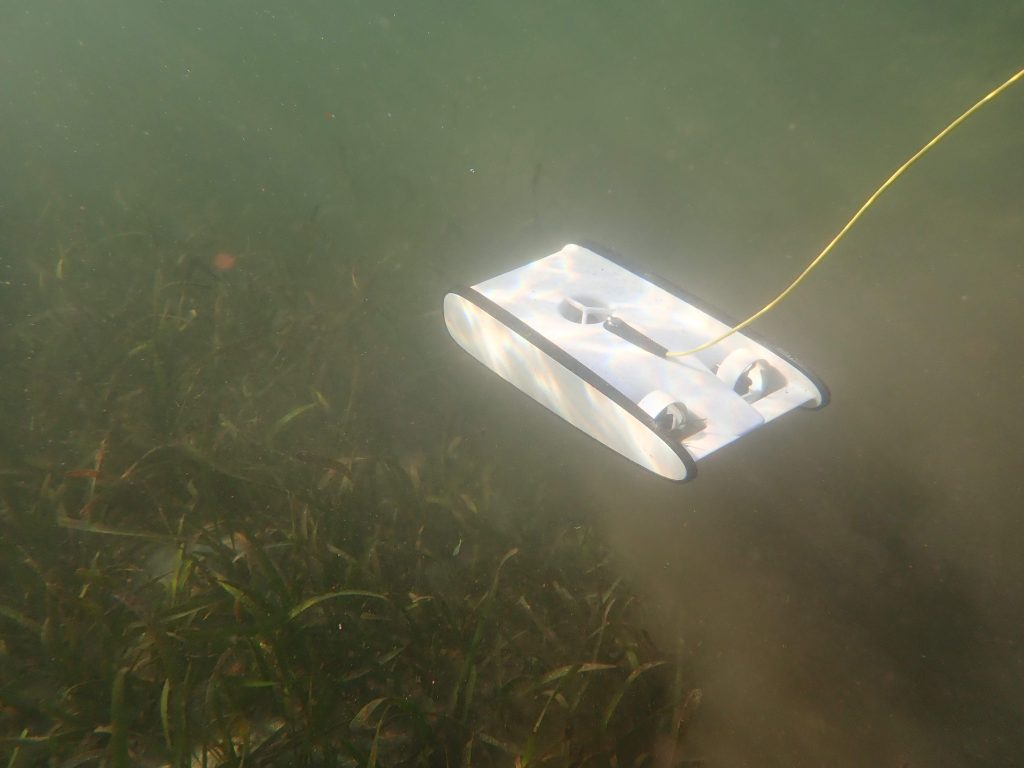 Trident, one of the top ten drones on the market: http://www.top10drone.com/best-underwater-drones/

The workshop itself took place from December 3rd until the 8th. Matt, Jarrod and I prepared the whole program which mostly consisted of questions that the participants would answer in groups, followed by plenary discussions. We also sprinkled in a few lightning talks to learn more about each other’s research. And we organized two excursions. One was a snorkeling trip to familiarize everybody with the different marine habitats and ecosystems at Bocas del Toro. The other one was of palaeontological nature where we went to an island with plenty of fossils. We brought a few hammers and collection bags. Everybody would spread out and collect fossils. Most of these fossils are more than 3.5 Million years old. This is older than the isthmus, hence these fossils lived in the big ocean that was later split into Pacific Ocean and Caribbean Sea. This excursion was led by Aaron O’Dea. It was my personal highlight. I got very emotional. Happy. Standing there and embracing one of the most awesome natural Darwinian experiments by nature. 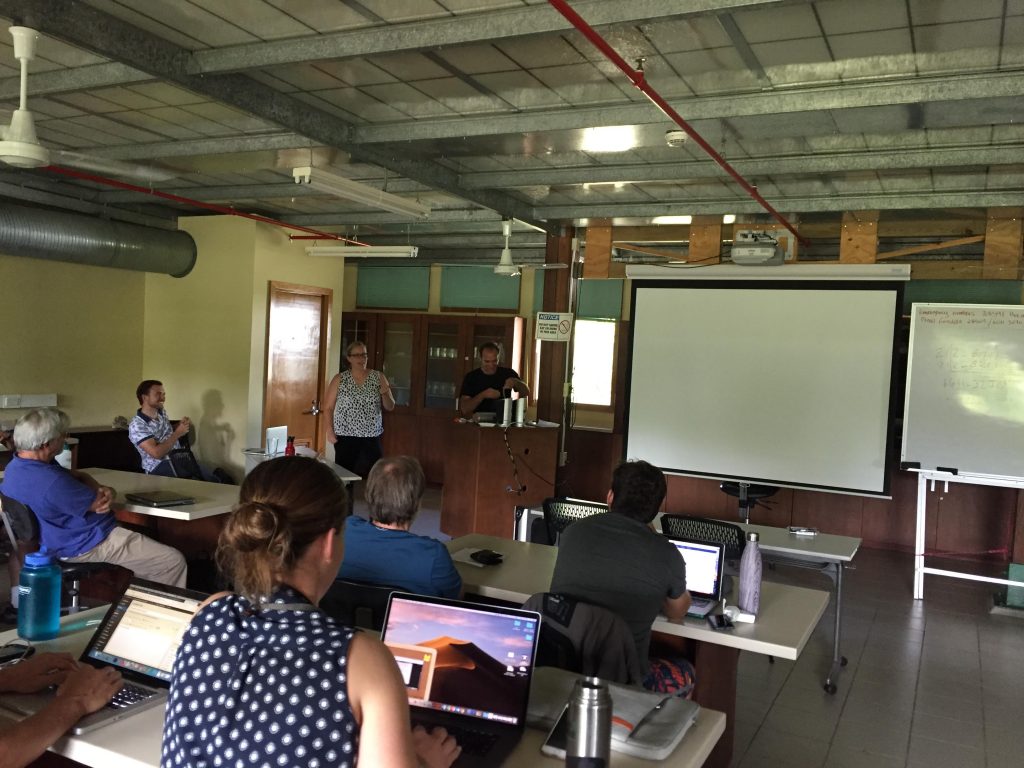 Lots of fun in class… 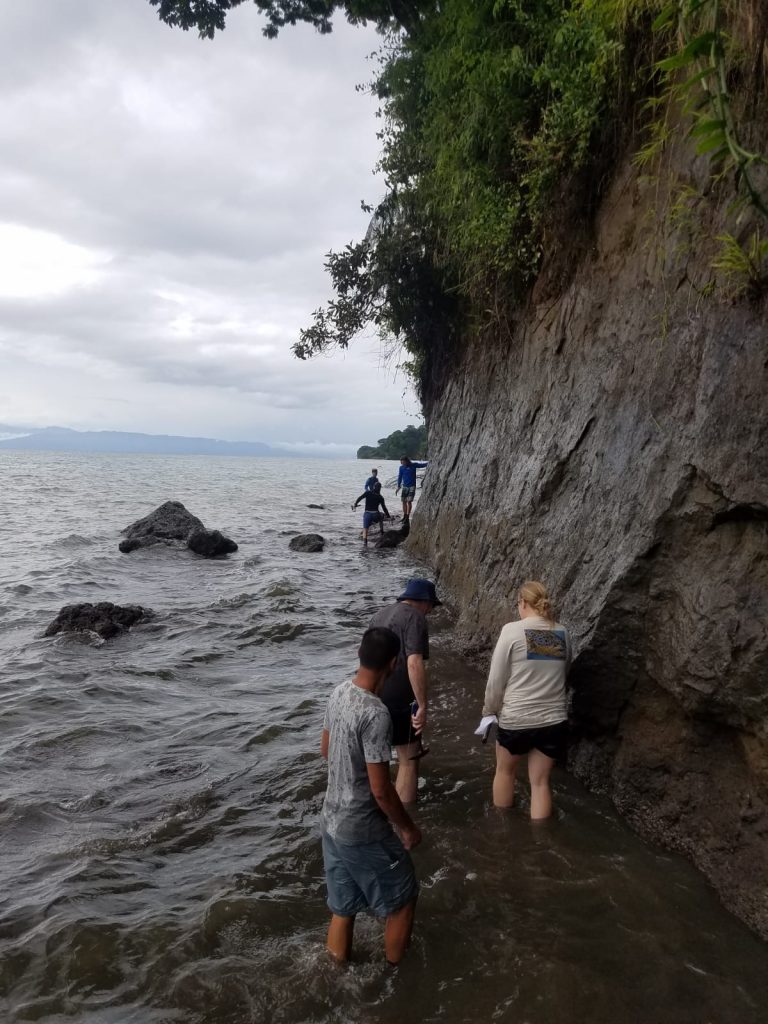 … and in the field!!! Wall of fossils on the right and the isthmus straight ahead.

The raise of the isthmus of Panama is not only the playground of our research, it also affected the evolution of us humans. I learned at the Biomuseo in Panama City that the closure of the isthmus gave birth to the Gulf Stream. The Gulf Stream affected the climate all over the planet. It was after the final closure that humans migrated out of Africa. There is evidence that the Gulf Stream made Northern Africa drier and savannahs developed where previously had been forests. This coincides with humans walking more upright. I never thought about the relationship of this small strip of land and human migration out of Africa. Sure, it makes sense that this land bridge would allow species to cross from North America to South America and would ultimately affect biodiversity on land. But would it also affect global climate and indirectly facilitate human evolution? 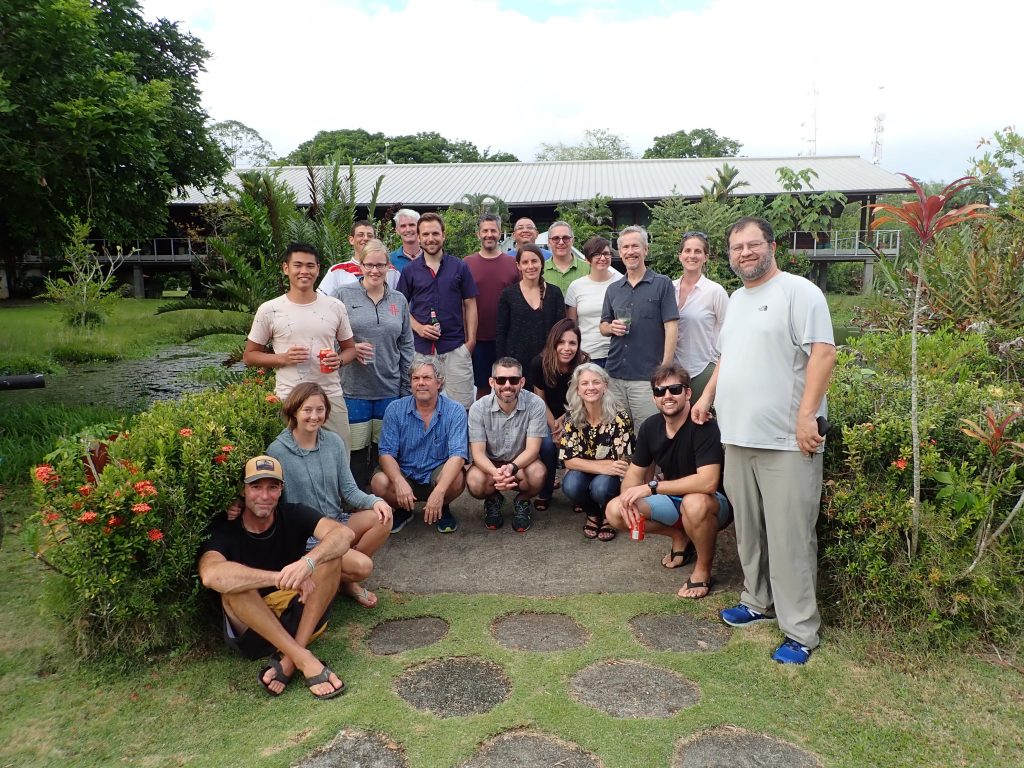 All our #istmobiome workshop participants. A diverse sample of contemporary Homo sapiens.

What we are studying right now is how the rise of the isthmus affected marine life and symbioses in particular. We are working on many different marine host systems including urchins, porcelain crabs, snapping shrimp, reef fish and lucinid clams. If you want to read more about the workshop and what we discussed, check out our istmobiome website: https://istmobiome.net/

Now we are writing a white paper about what we discussed at the workshop. Stay tuned!

I would like to shout out a big thank you to all participants, the Moore foundation for giving us money and sending Jon Kaye – a very congenial person; and the Smithsonian Tropical Research Institute (STRI) for financing and facilitating this workshop. Last but not least, I want to thank Ben for keeping me sane. 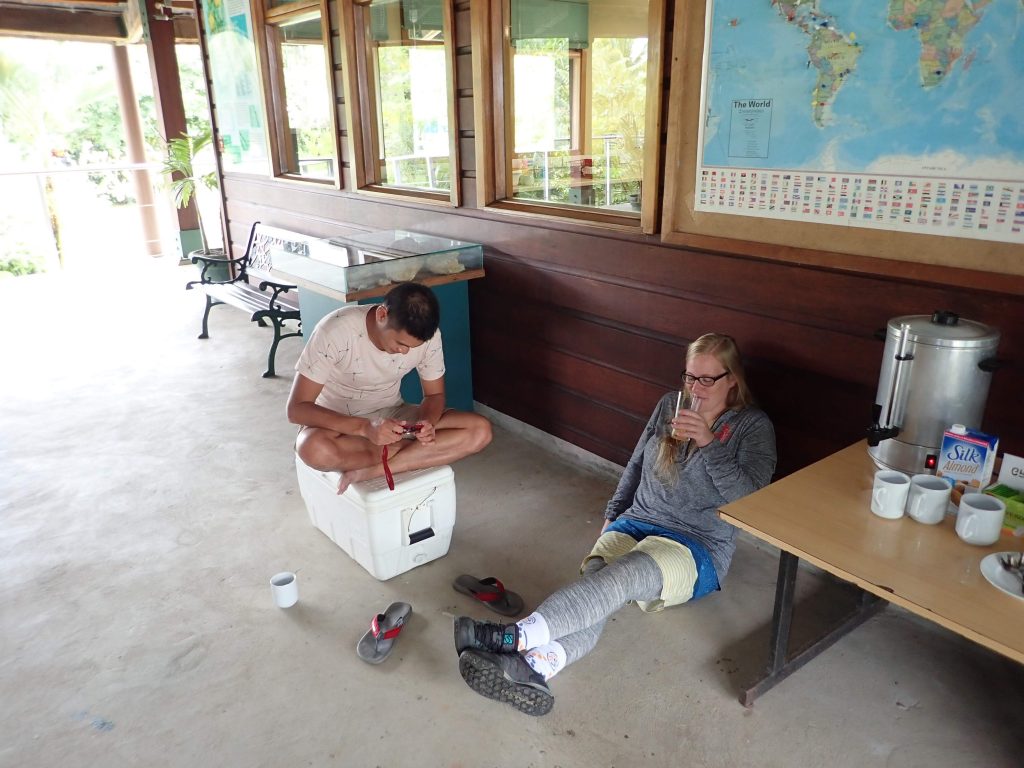 And Jonathan for mentoring me. Jonathan is such a good person that there are no English words for him. Hence, I tried to introduce him in Swiss German… Check out our live tweets from the workshop under the hashtag #istmobiome! 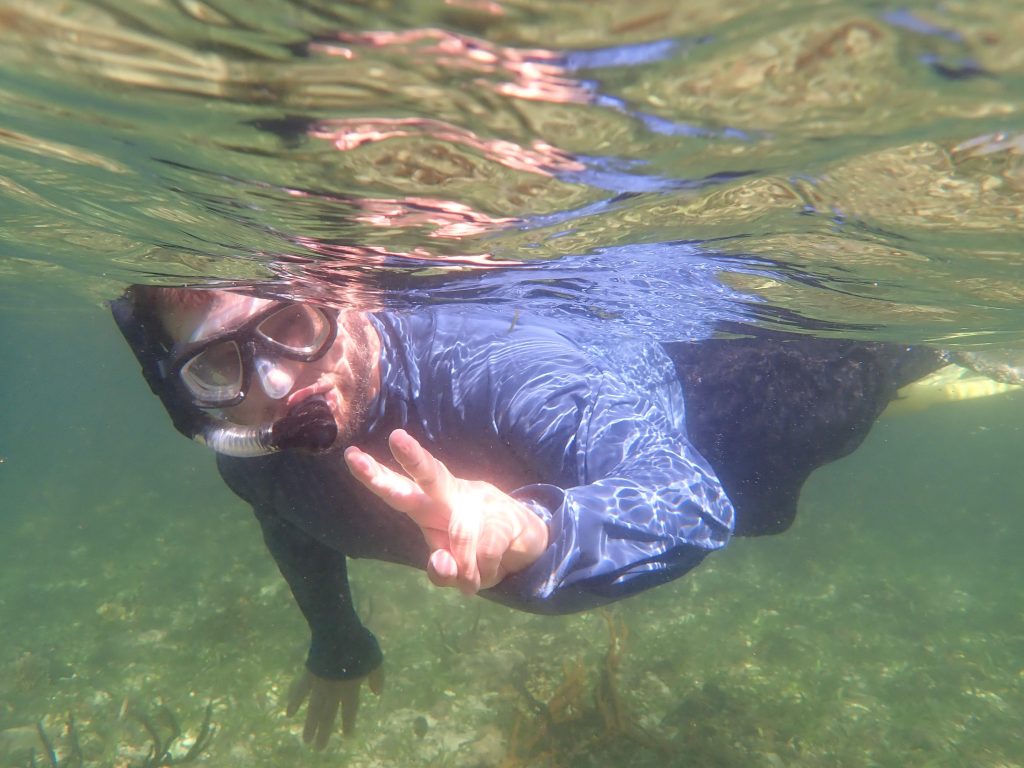 After the workshop and collecting more clams, my family came and spent a few days with me in the jungle of isla Bastimento. I love Panama. And I am trying to share this with my closest ones. 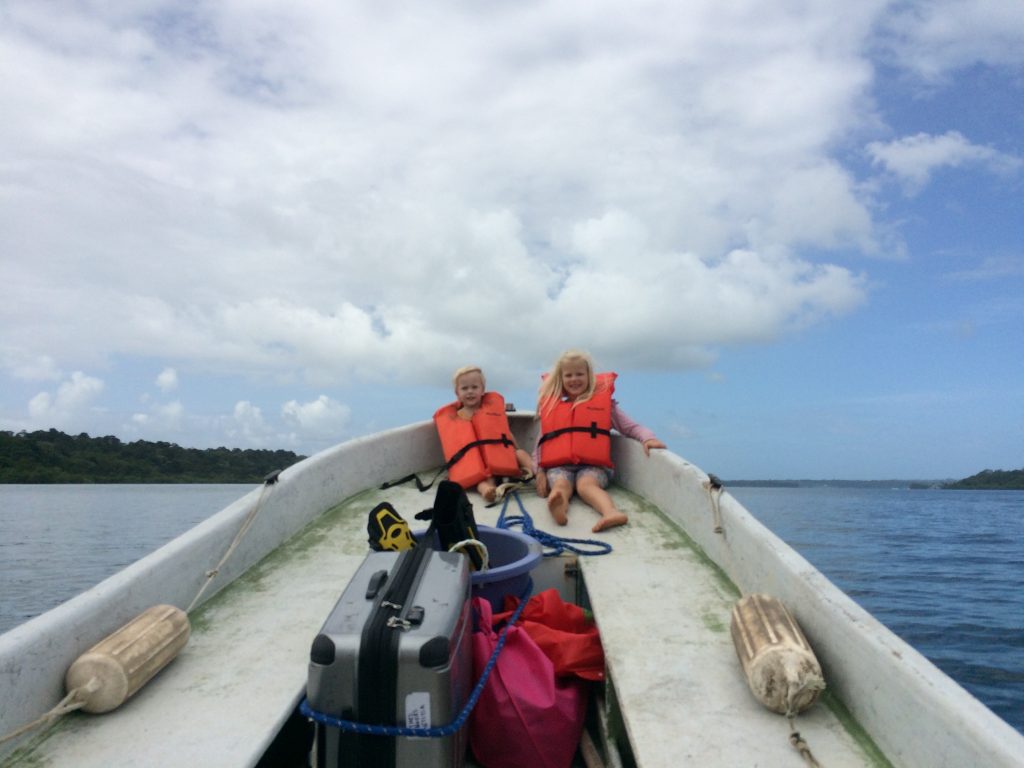 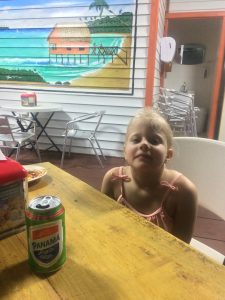 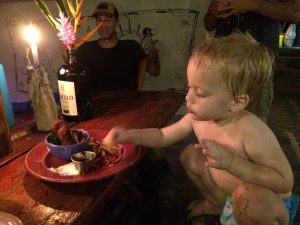 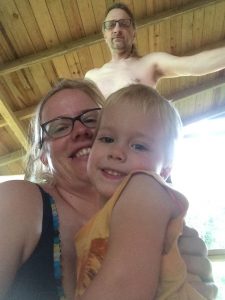 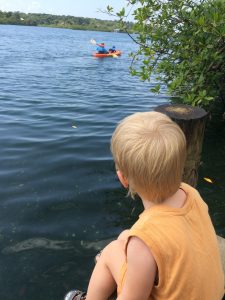 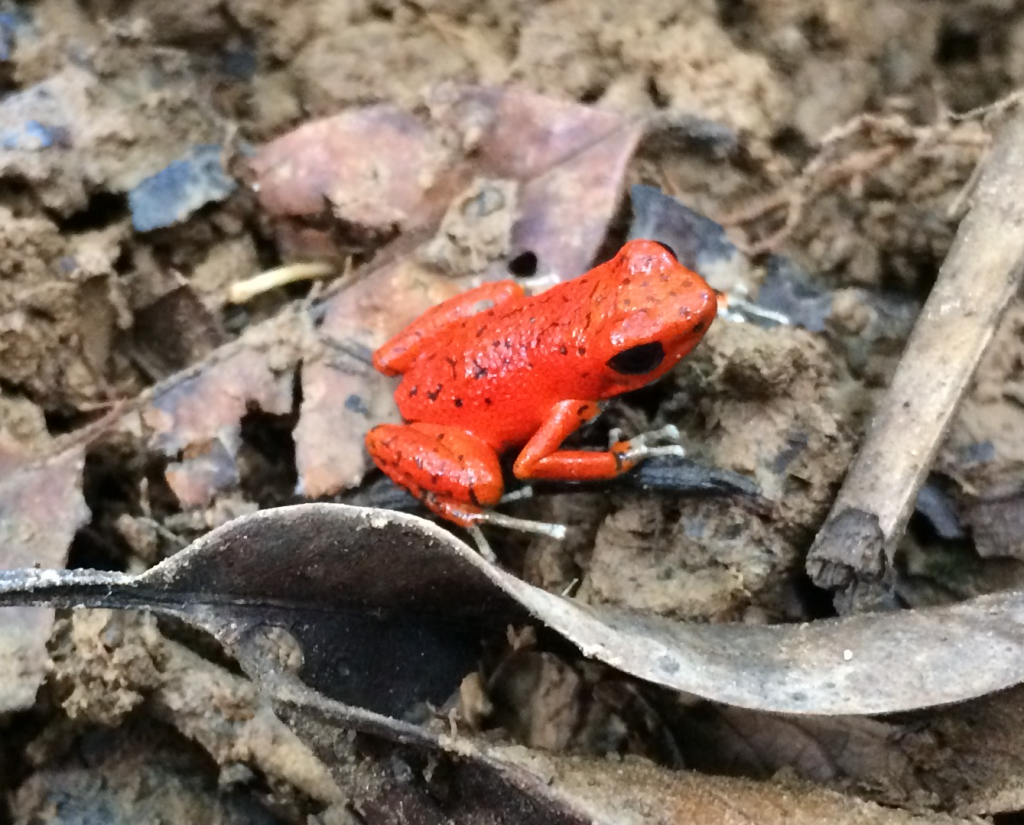