I have this personal feeling about Humboldt County. I seem to love it. I don’t know if I could live there. I don’t like the meth heads. However, I always love to visit. I also met the nicest people there. Tommy Williams made it possible that I could go sample fish close to Arcata. An opportunity I had already given up on. He wrote to me on Friday. And on Sunday we were already in Arcata. 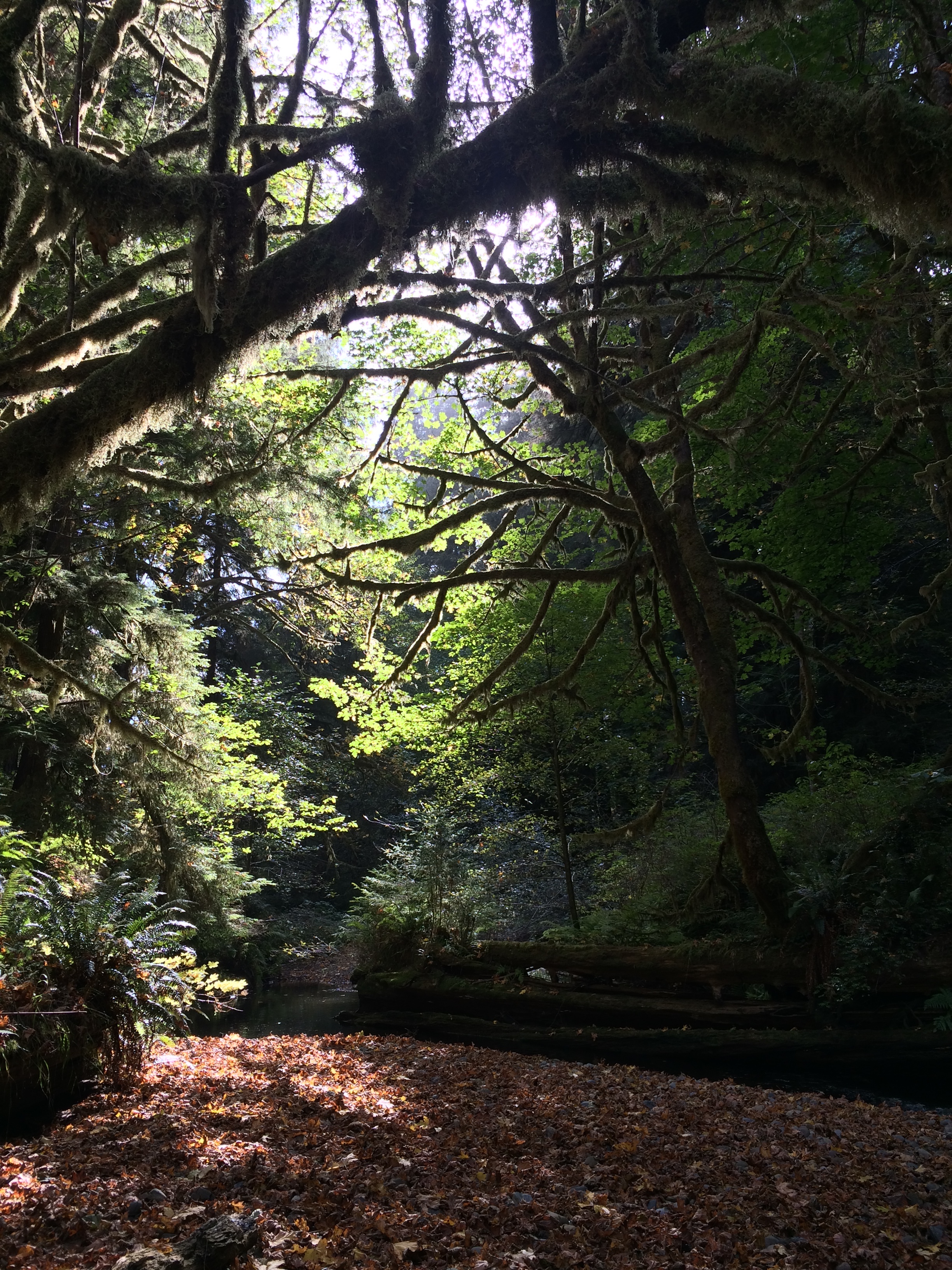 I sampled young of the year from Prairie Creek the first day. Prairie Creek is super pretty. On the way there we saw lots of elk hanging out in the water. We had beautiful fall weather and sampled in the middle of a redwood forest. I joined John’s crew, including Chris and Reed. The day was phantastic! These guys are super nice and showed me how to use a seine – a kind of net to catch juveniles. At Prairie Creek there are almost only Coho salmon (Oncorhynchus kisutch) research projects. Yet, I am only interested in O. mykiss. Here comes the special challenge: at this life stage you cannot discern O. mykiss from cutthroat trout (Oncorhynchus clarki), which are also very common in this creek. Three very similar species in one little creek. I just doubled my sample size and I will use genetic markers later to find out who ist what. I was a one-woman-show and processed all my fish alone. I got a bit tired but then I met Jesse and Jolyon, two other fish researchers in the same creek. Jolyon offered me some smoked Chinook salmon that he had caught and smoked the day before. It was delicious and gave me a lot of energy to finish this field day! 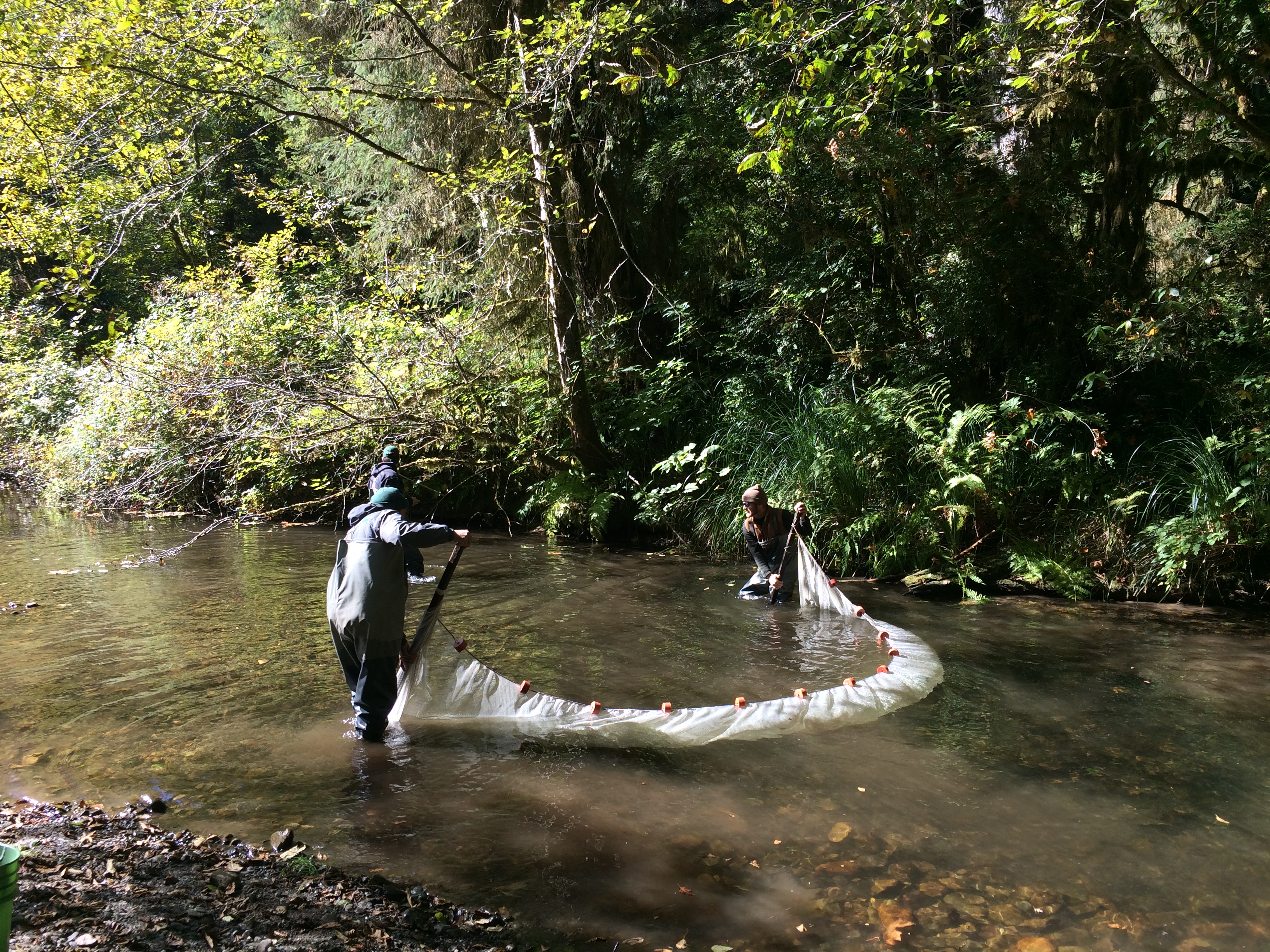 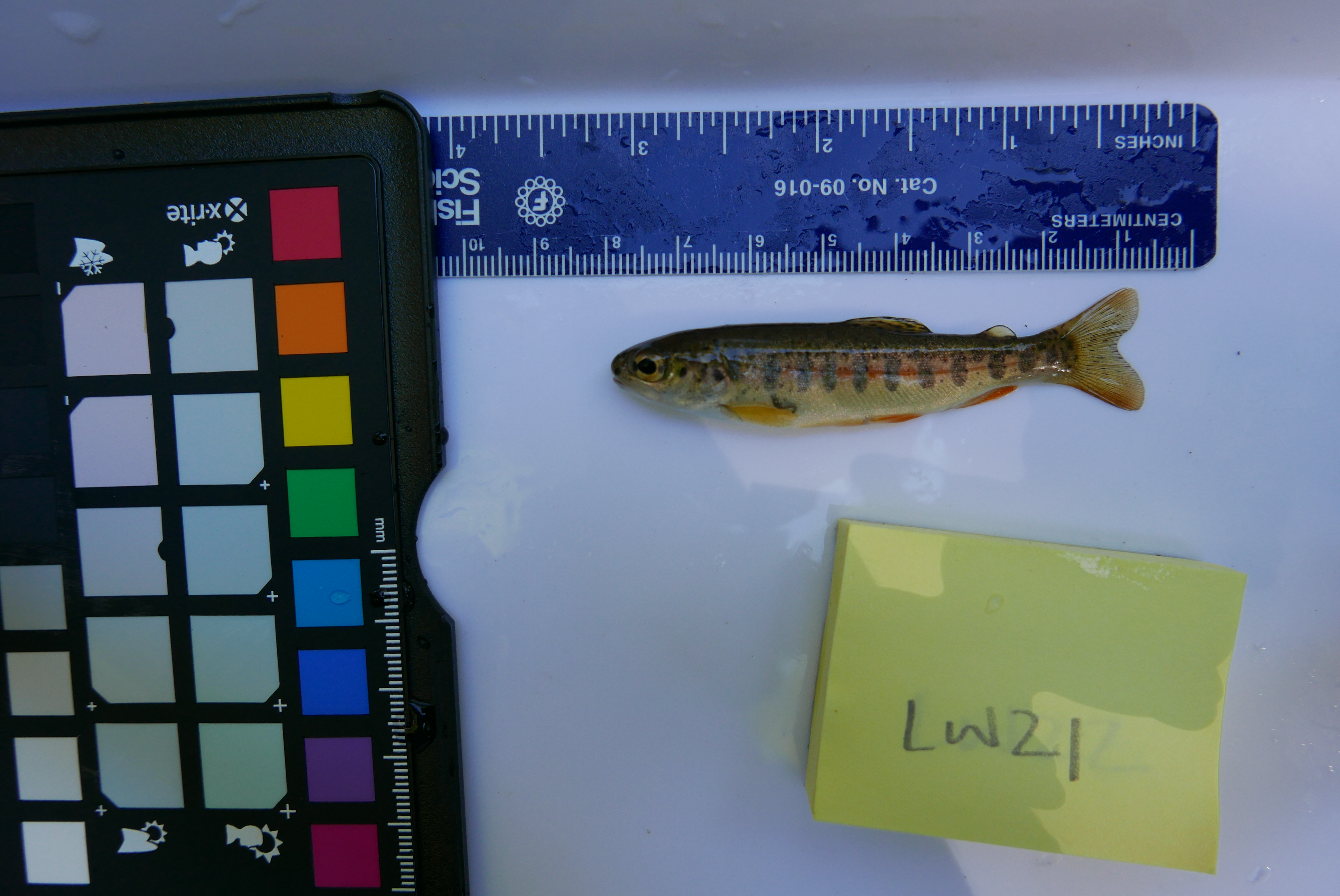 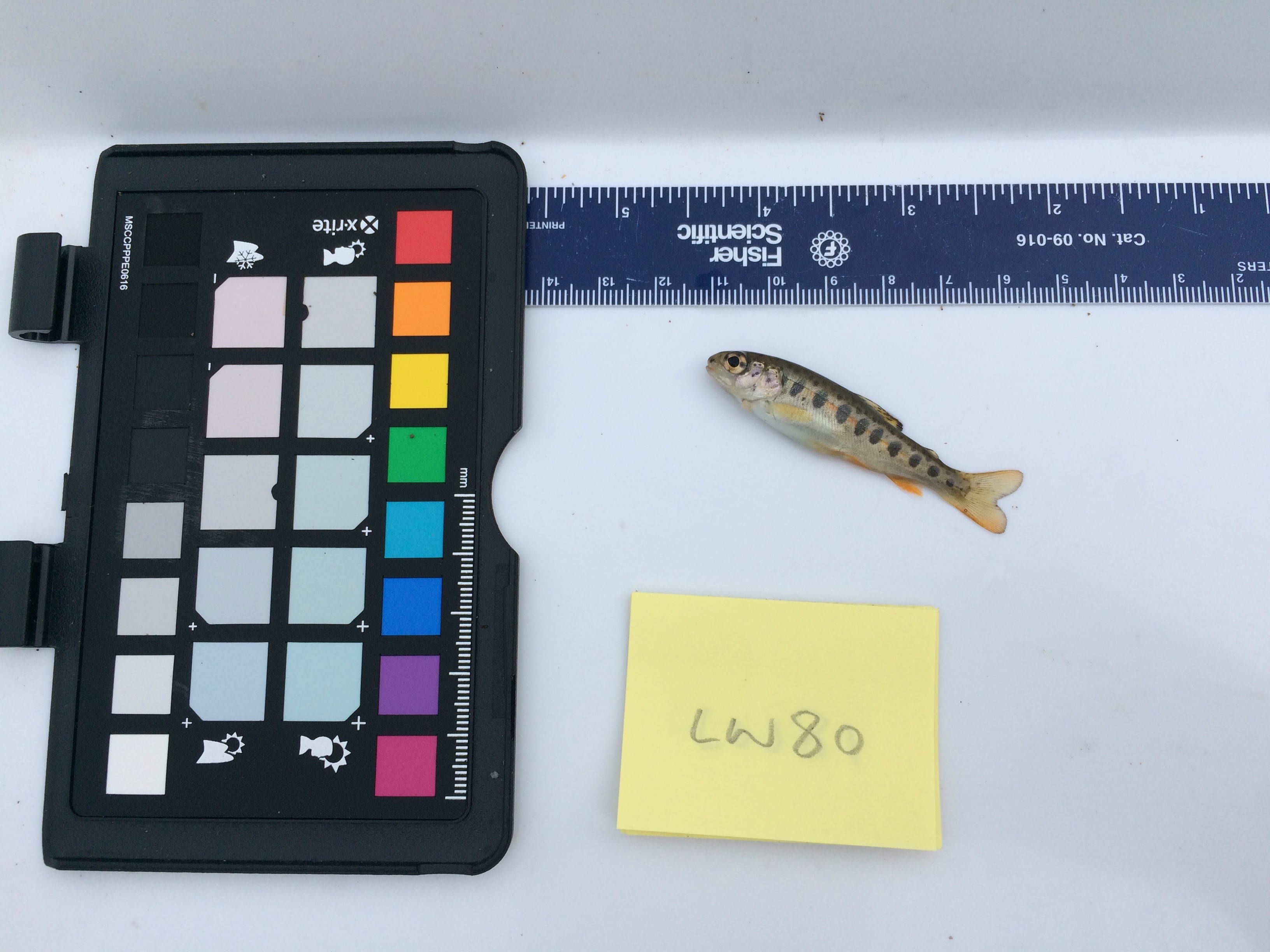 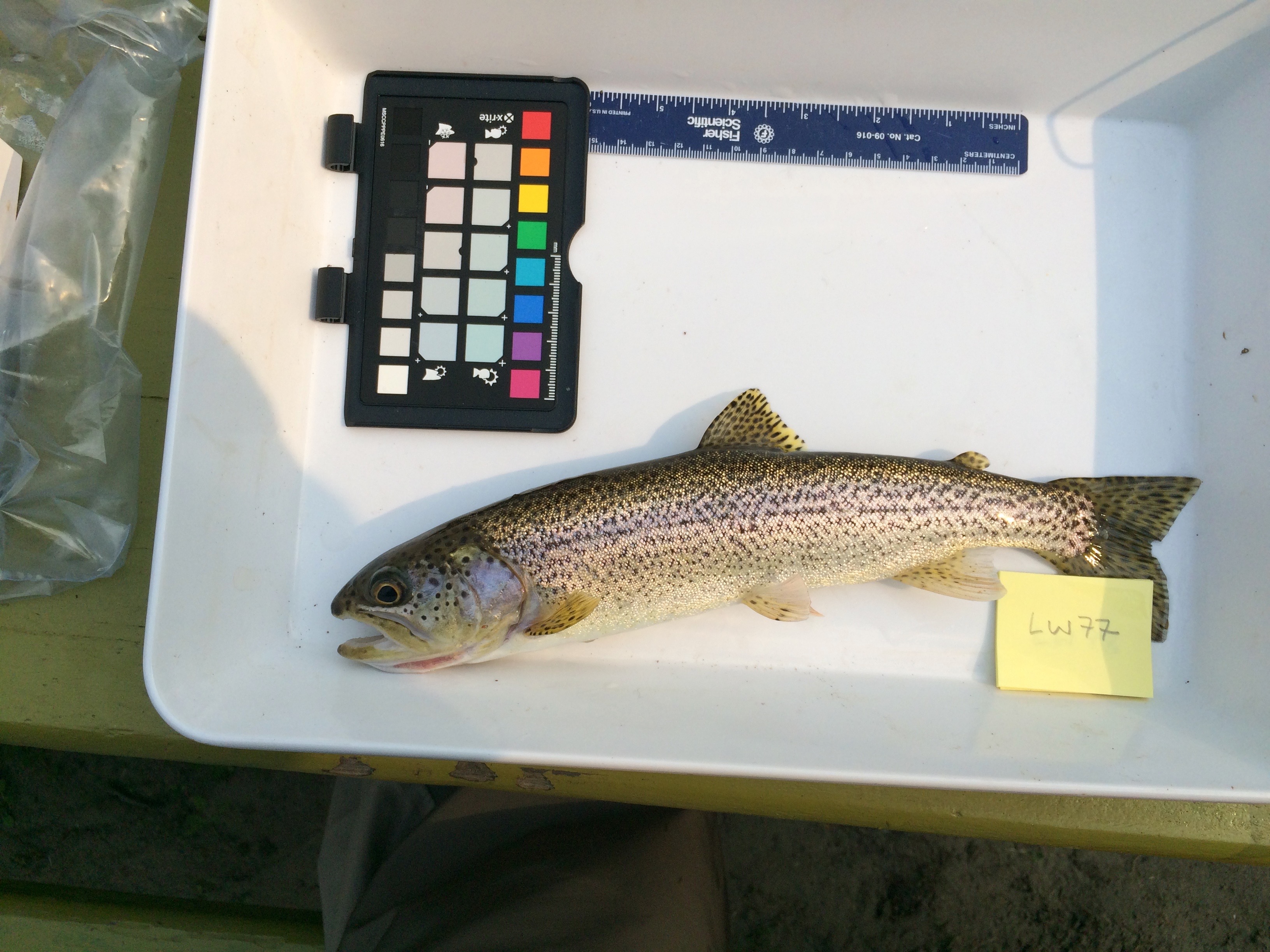 I spent the evening with my family. We had good food and beer. Arcata is a little jewel.

The second day I spent with Colin and Eric at Freshwater Creek. They are stars in seining. They caught whatever they wanted with their net. Two AmeriCorps had their first day in the field. AmeriCorps are volunteers who work for about a year in conservation projects at many different locations all across the state of California. Colin taught them a lot about monitoring Coho salmon and estimating their survival during the winter season. I tagged along and learned a lot.

While I was working, Donny enjoyed the area with the kids and met his old College friend Mike and his family. We heard about wildfires further down south and during the second day the sky got grey and full of smoke. The wind brought the smoke up to us. Our phones did not work anymore because some fibre cables were burnt. Luckily, we found each other again. We met at Freshwater Creek and Linnea helped me finish processing the fish. 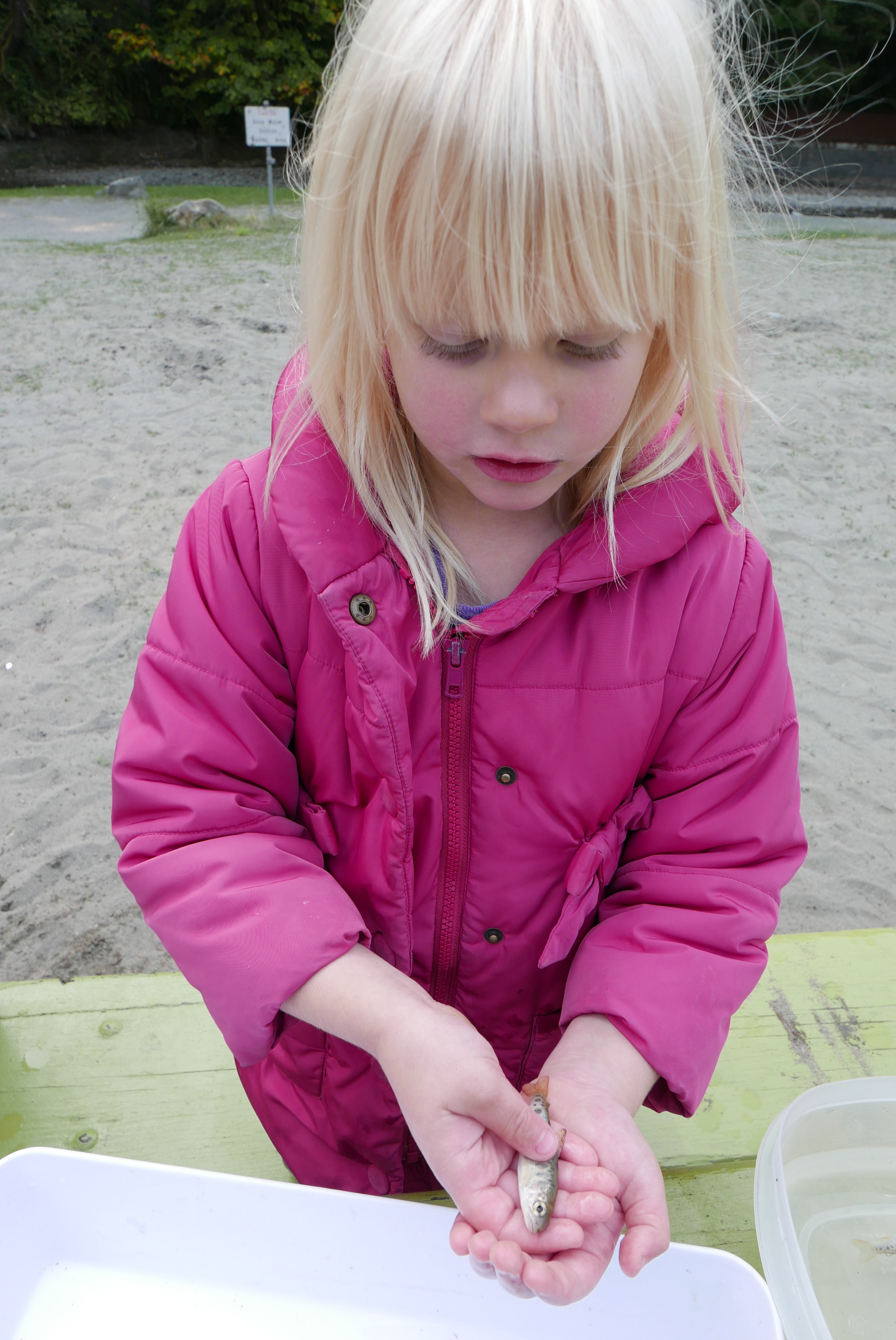 The same night I drove the whole family back down to Albany. It was dark but we could see the wildfires between Willits and Ukiah! Right next to the highway. Huge fires. I have never seen something like that before.

I had a short night because I had to get up early the next morning to sample fish in Marin County at Walker Creek with Greg and his crew. He also had a helper from the AmeriCorps! For this sampling day Laura joined me to help. She is a great helper and very pleasant to hang out with! On the way home we went to taste some French cheese at a farm close to Point Reyes. The sky was orange and full of ashes. The particles in the air made the sun redder than usual. Totally surreal. 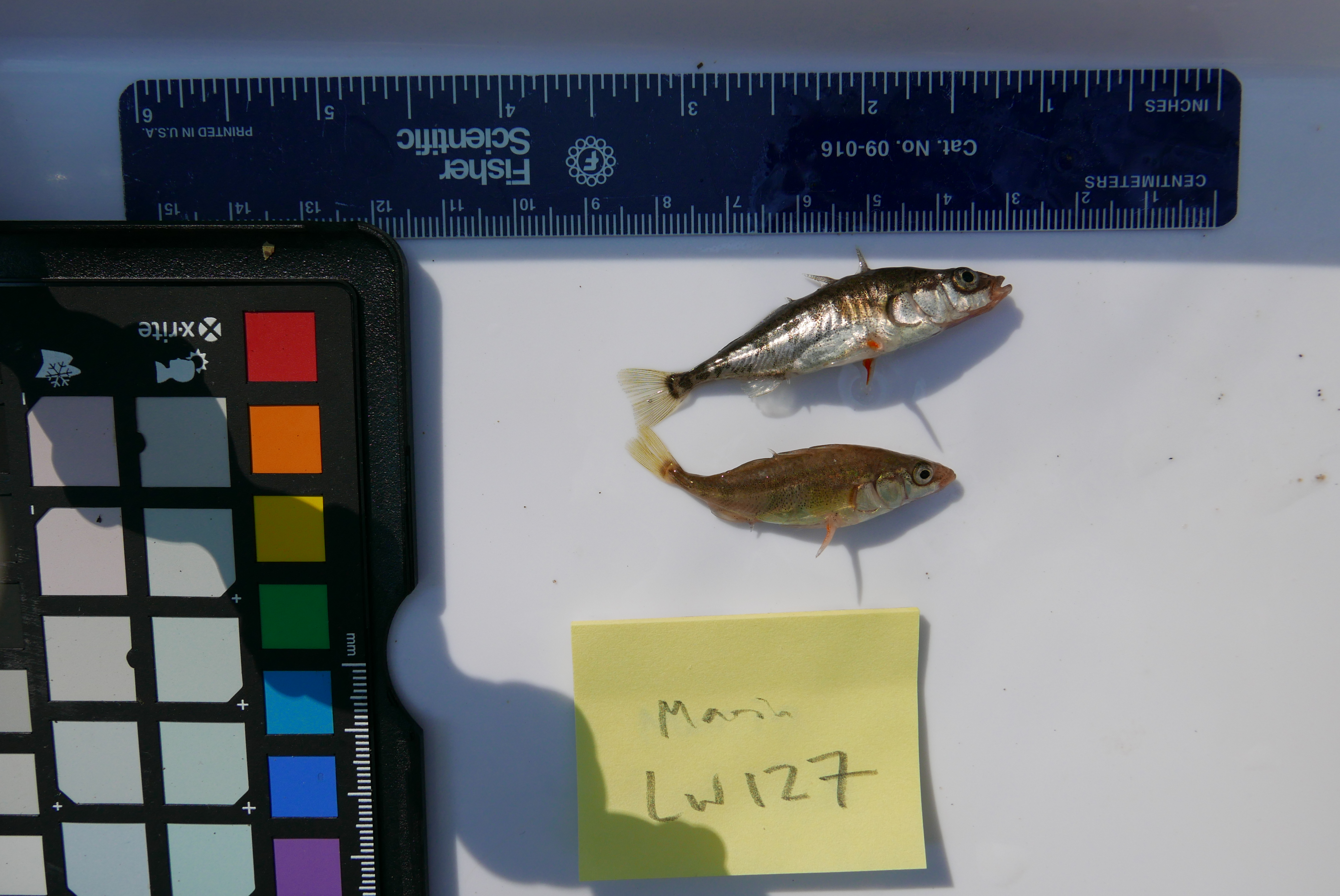 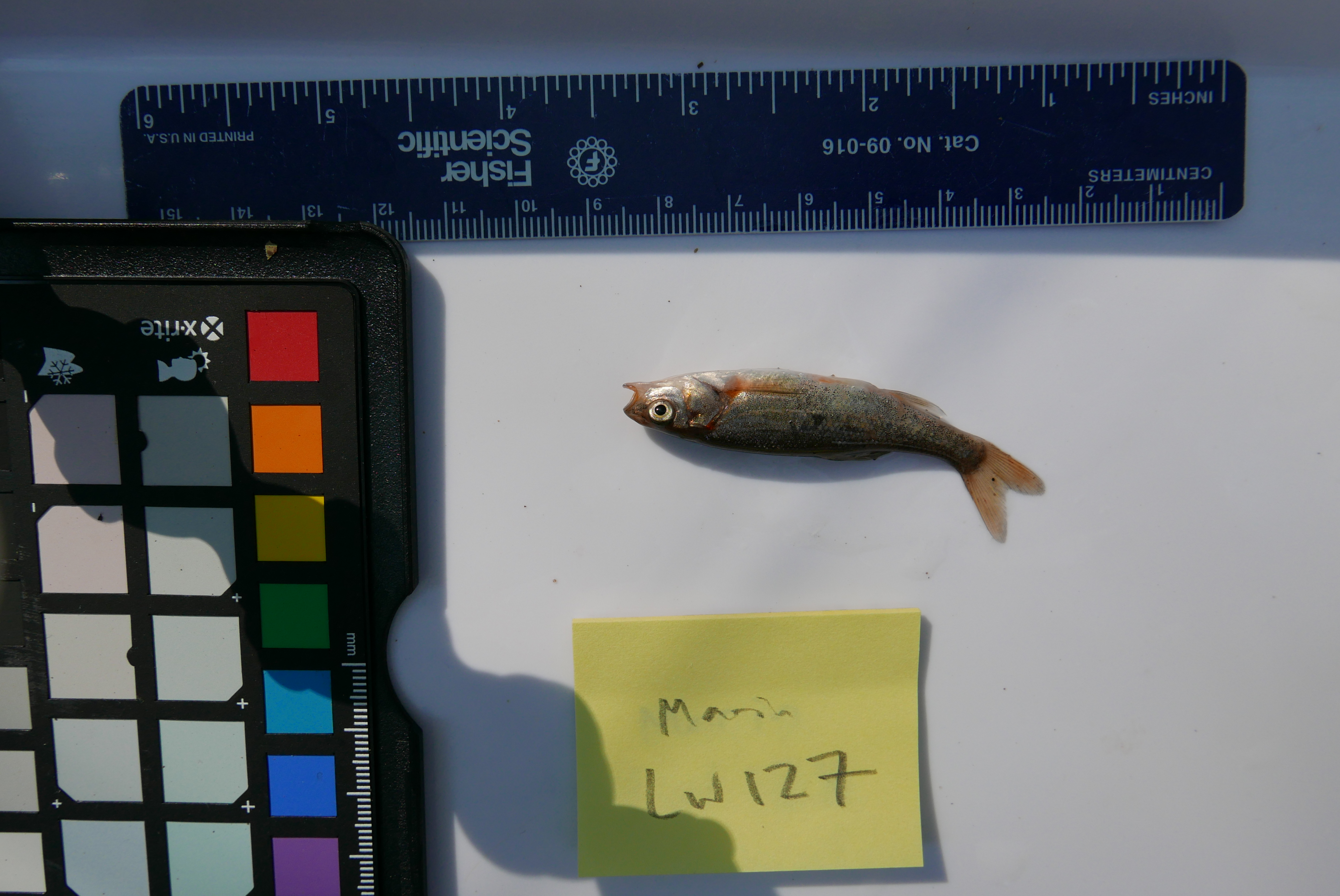 Roach on its head 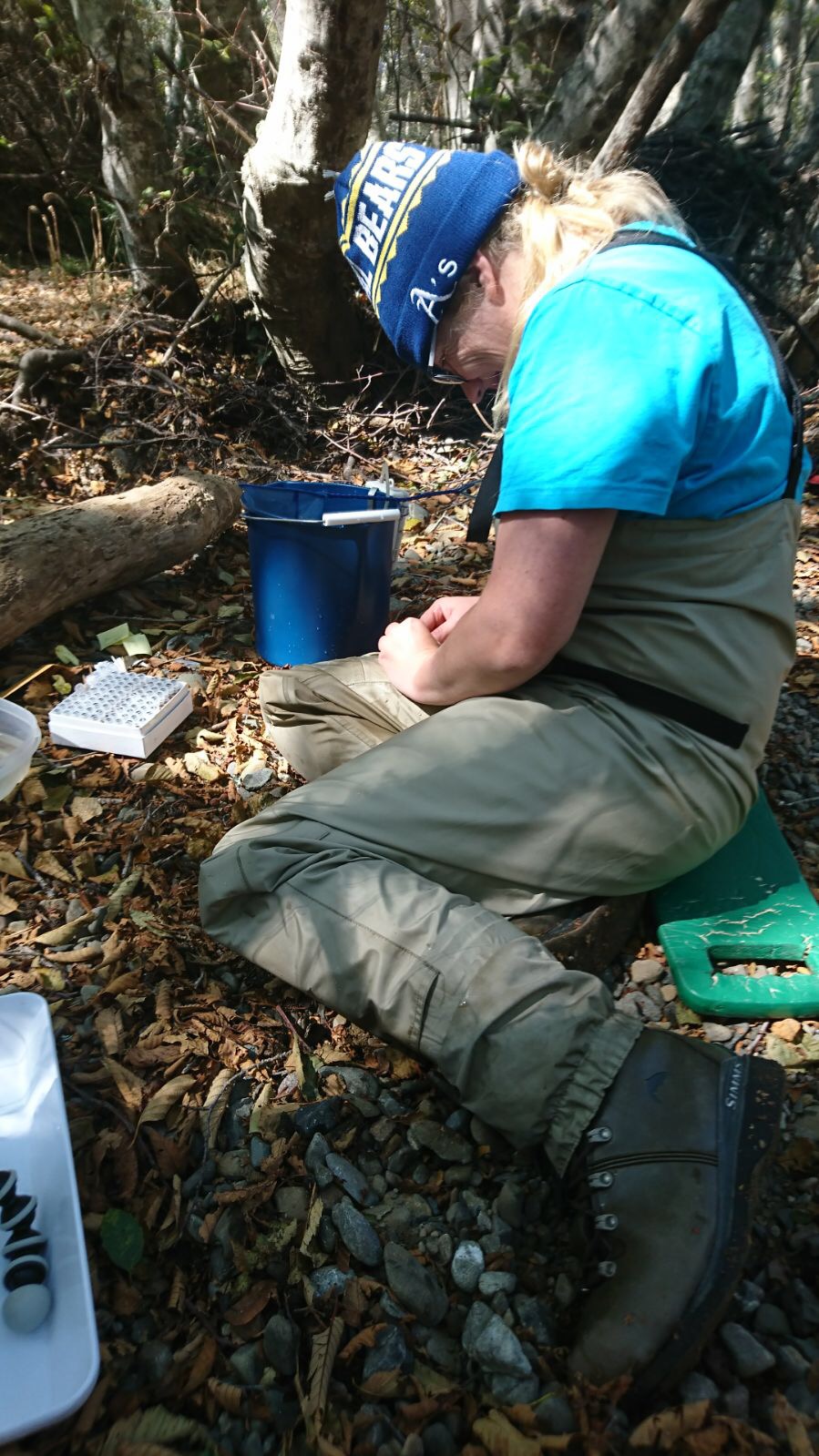 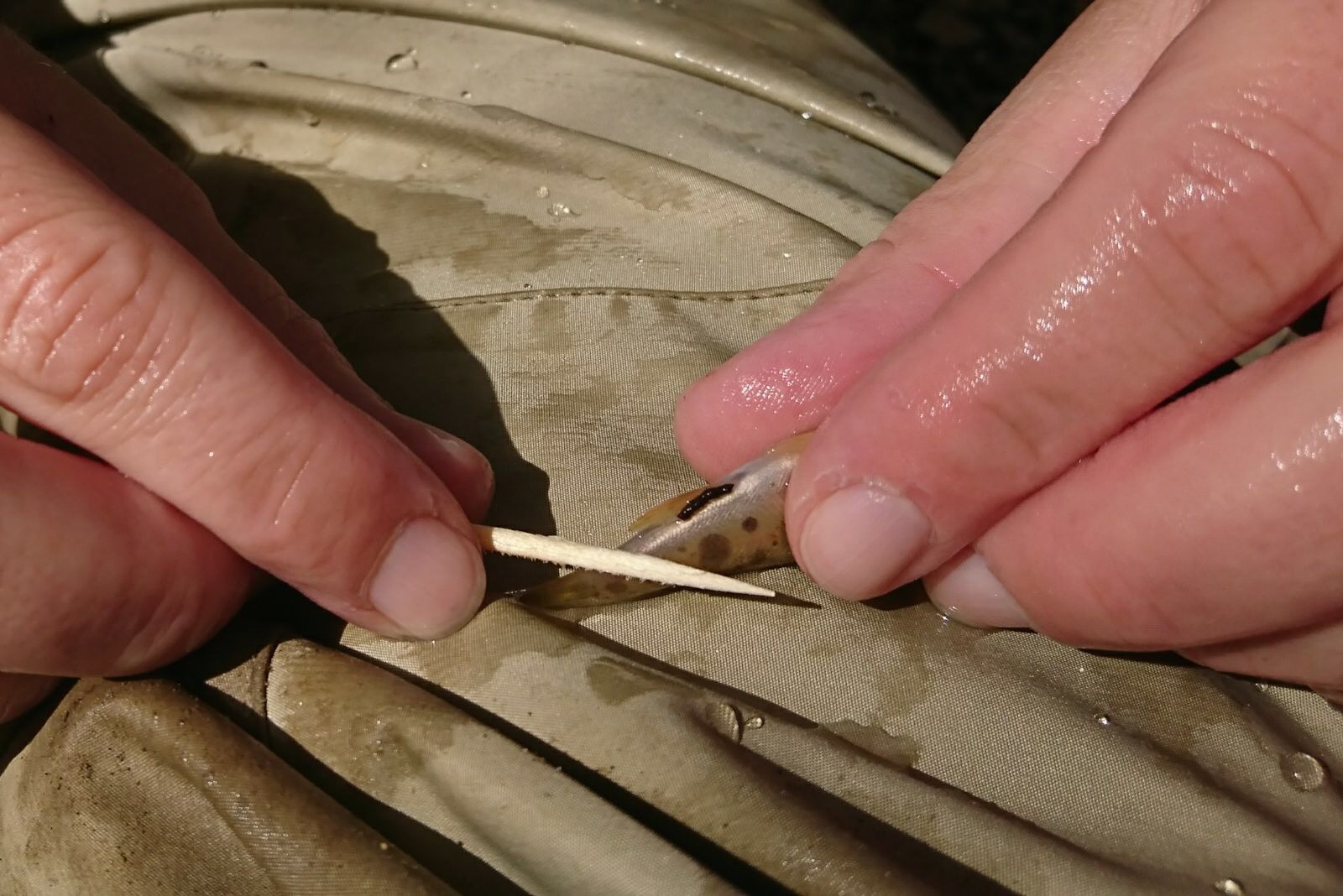 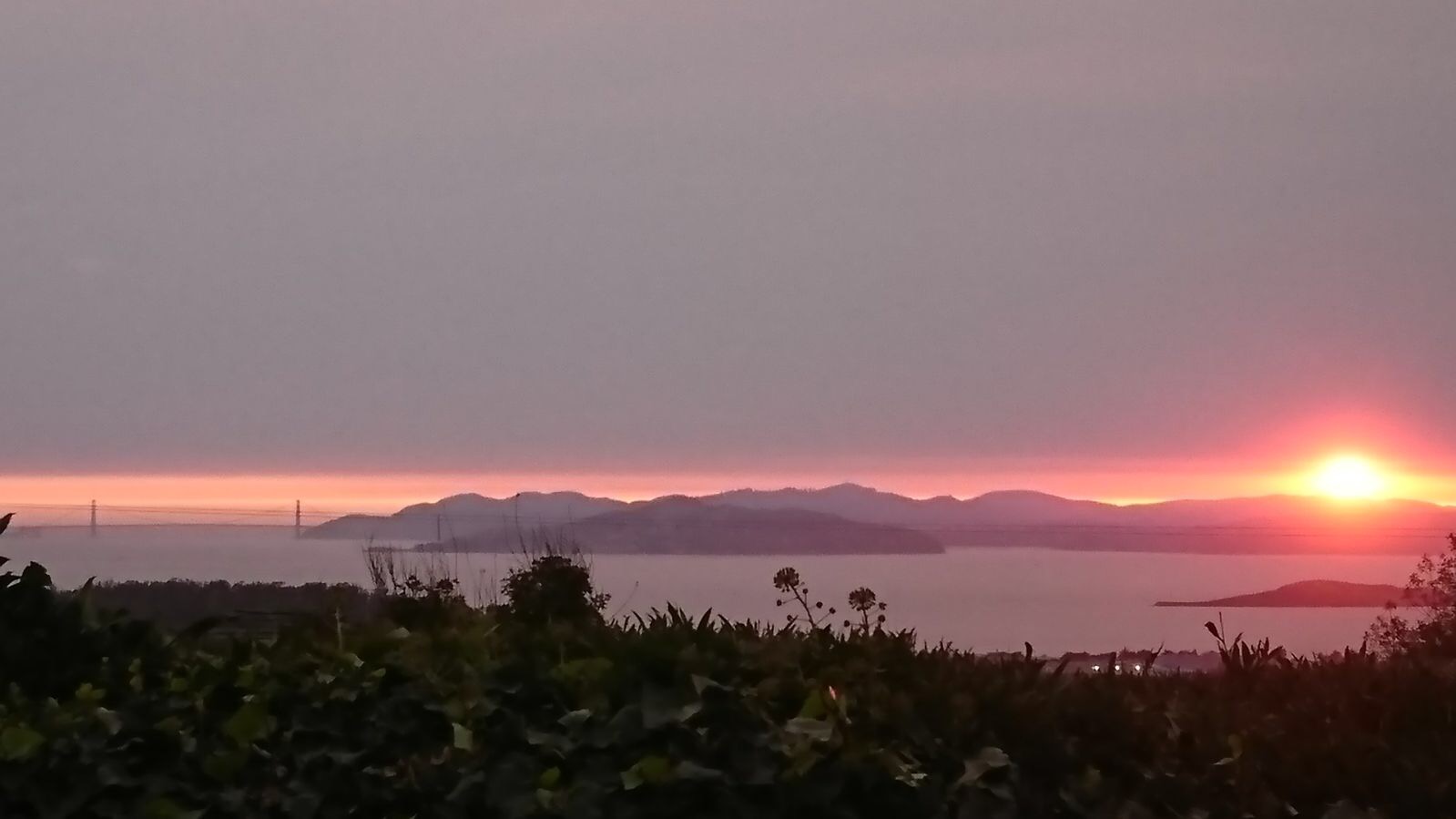 The last couple of days I had several meetings to organize lab work, work on the frog project, and teach researchers about health care. I hurried from meeting to meeting. Everything seemed pretty surreal in the constant smoke and strange sunlight. Even breathing was getting harder and harder. The Bay Area is a smoke hole! 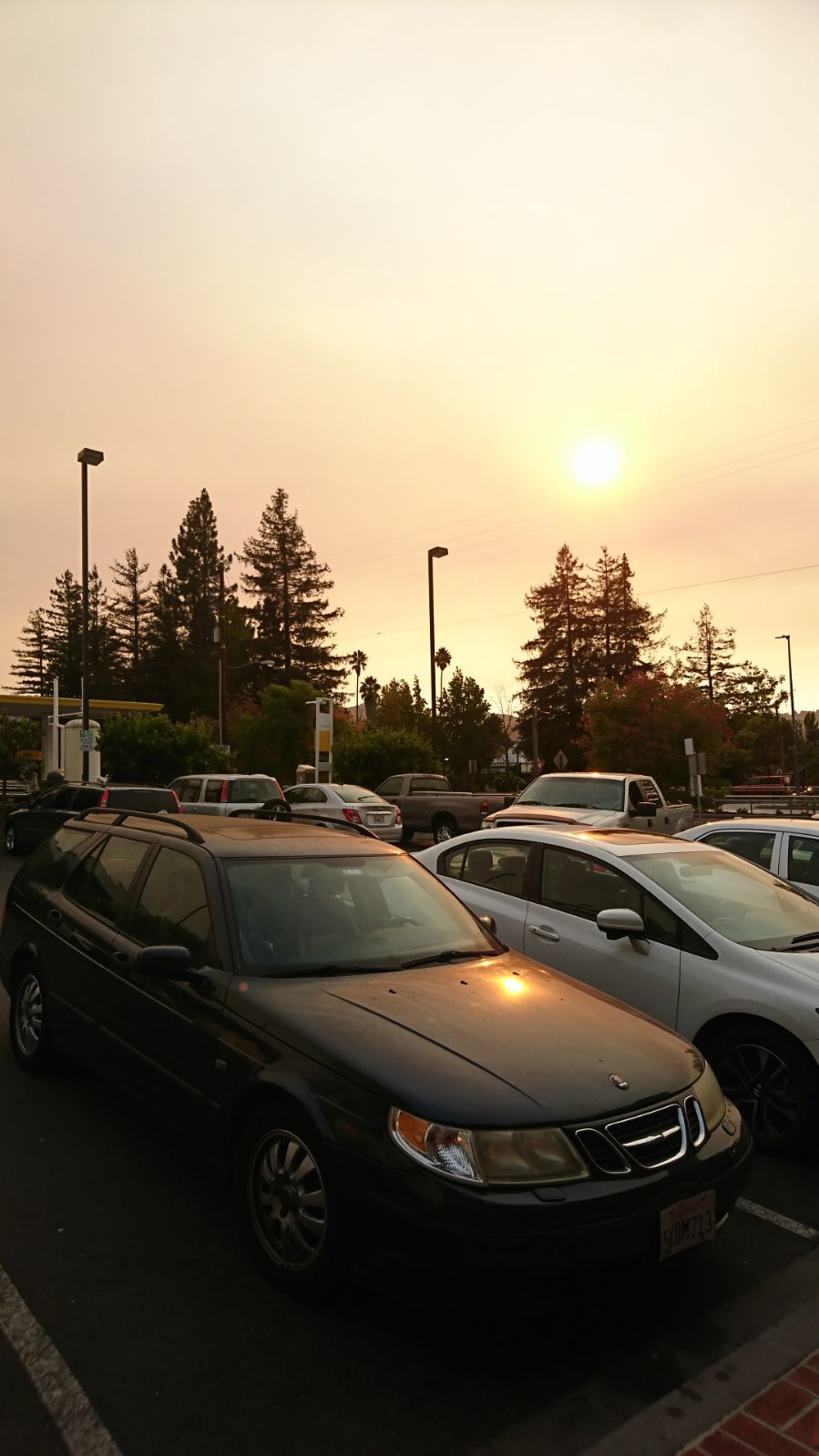