Well, on Friday, almost two weeks ago, we decided to fly to Panama. It just made sense to join our STRI collaborators during their field trip and to take Linnea out of school while her regular teacher was still sick. When we arrived at San Francisco airport very early in the morning of Saturday, the lady at the check-in told us that we could not fly to Panama because Linnea’s passport will expire on December 1st and to fly to Panama you would need your passport to be valid for 3 full months. This is where our Panama trip ended.

We went back home to Albany and slept for an hour. Then I had the brilliant idea of calling the Swiss embassy and asking them for an emergency passport. Unfortunately, they were closed on a Saturday. Donny spent some time on google and found out that today (!) there was the yearly passport day in San Francisco where people, especially families, can get passports. So, we drove to Berkeley, made passport photos, copied birth certificates, called grandma, and rushed to San Francisco. At the passport office, we got called up immediately and ordered Linnea’s passport. However, the friendly lady told us that it would take 4-6 weeks to mail the passport to us. If we wanted if faster it would cost extra and still take 2 weeks. Then, Donny started crying. He explained the lady that this trip to Panama could change our lives. He told them about me and my research and that he wanted to see the country before moving there with the kids. The lady left, talked to her supervisor and came back. She told us that Linnea’s passport will be ready in 2h. 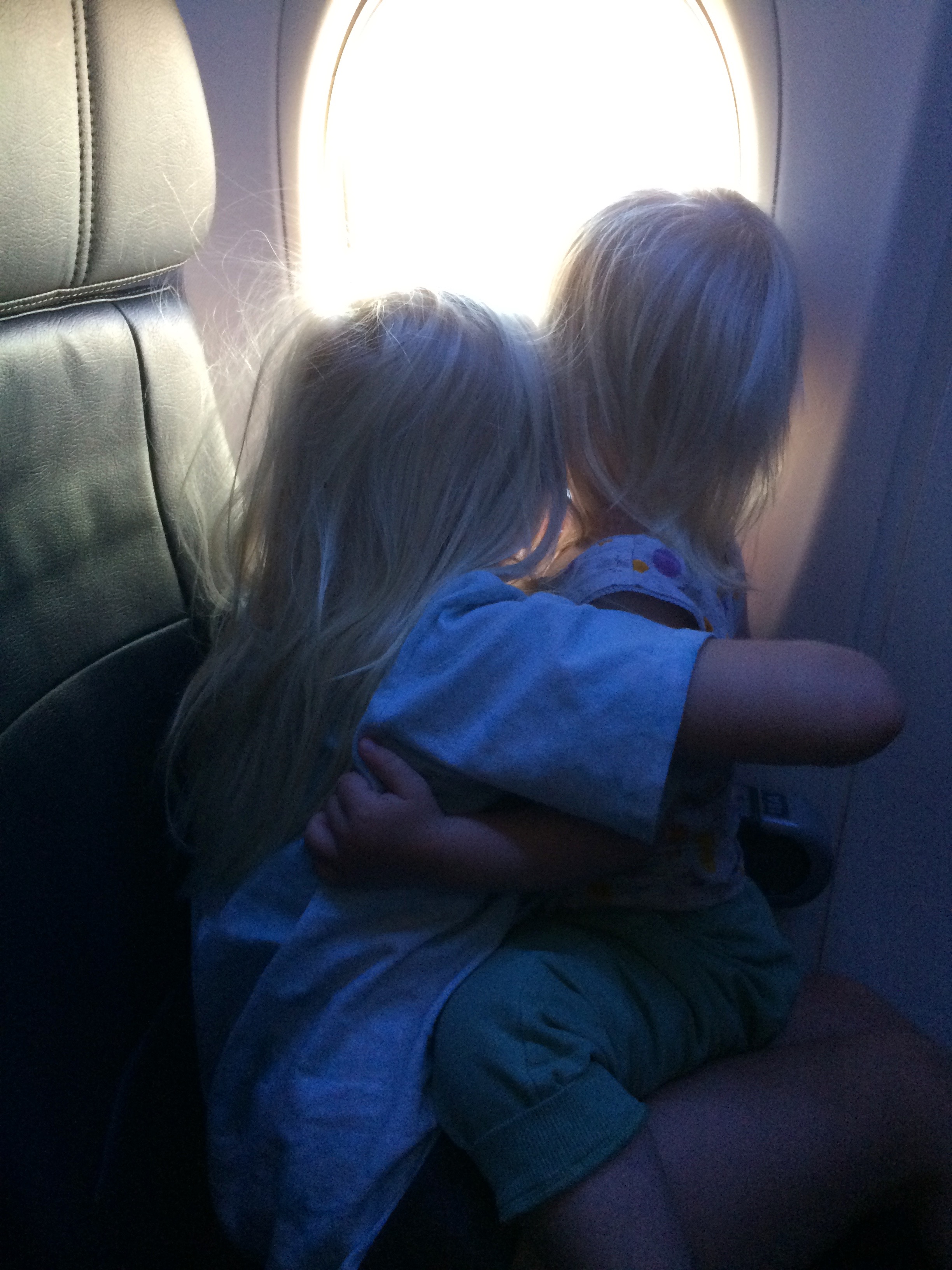 We arrived on a Sunday. The first evening we went for a 2h walk with the stroller and both kids to check out downtown Panama City. It was interesting, safe, but not very exciting. After a trip to ‘Price Smart’, the brother of ‘Sams’ we had gotten enough snacks for the rest of the days and enough of downtown City. On Monday, I went on a field trip with Jarrod and Harilaos. Jarod picked me up from my hotel and I helped him prepare tubes and stuff in the lab on the island of Naos for our dissections later that day. The lab is very impressive. They have every kind of equipment, from gel electrophoresis to fume hood and MiSeq sequencer. Better than most of the Swiss labs I have seen.

Then Harilaos invited me for coffee at his house. An old colonial house with lots of Coatimundis begging for toast. 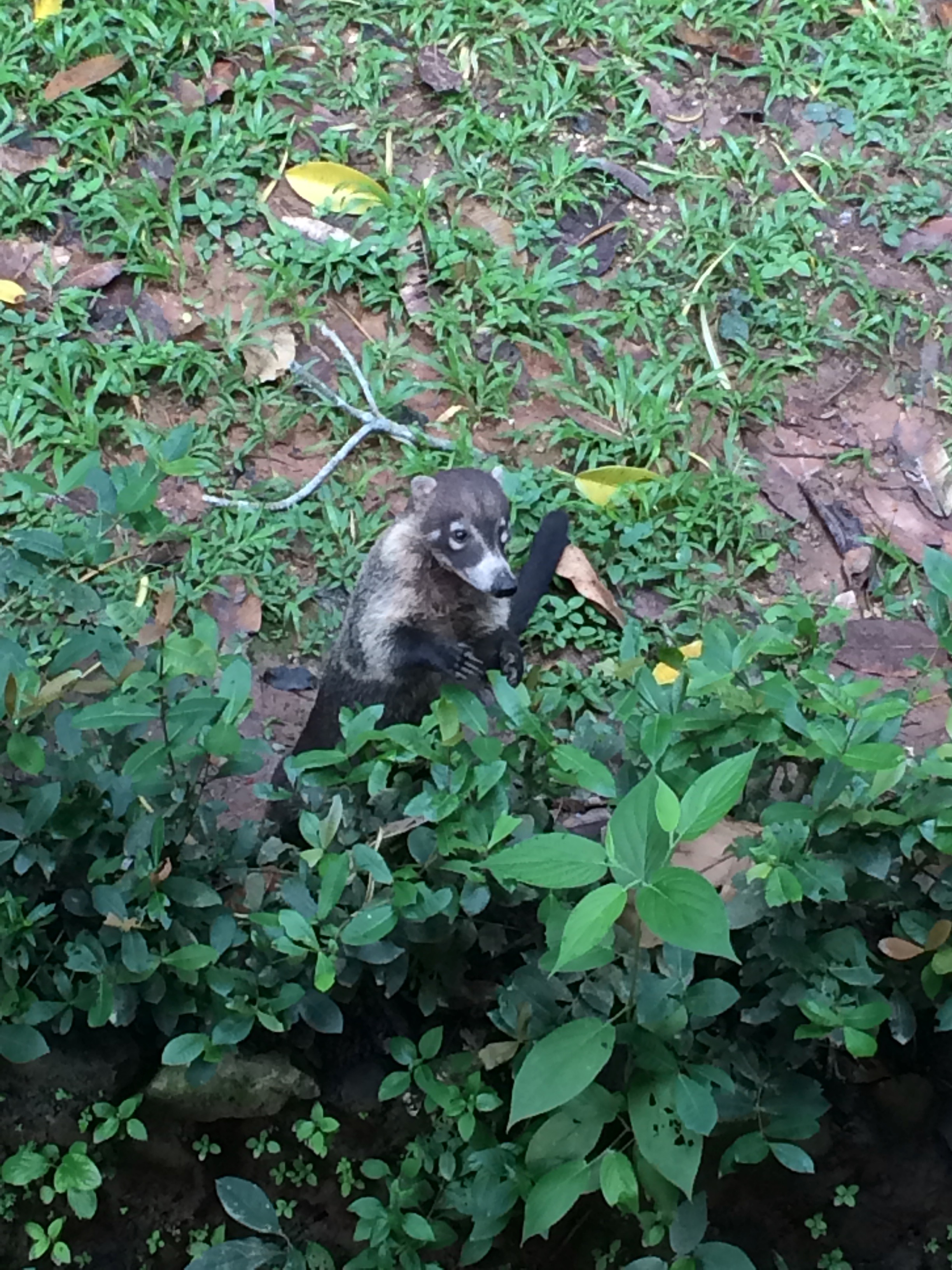 I liked the experienced greek and his strong, Italian coffee. He drove us across the country to the Carribean site, to Galeta, where we sampled urchins. We drove through a rainforest, the autopista and in the end a beautiful mangrove forest. There were several checkpoints where they asked us for identification and collection permits. At Galeta we met Haris’ technician Axel, his postdoc Carlos, and his intern Tanner. Here is a link to Carlos’ personal blog!

Diadema in their natural habitat:

Three different species of Sea urchins in their natural habitat:

Then, we drove back to the laboratory and dissected them to identify the microbes living on and inside them. Harilaos, Jarrod and I dissected. We split the work up so that each of us would dissect at least 3 individuals of each species and we kept track of who did what. We collected their fecal pellets first. Then, we poked them with a syringe and sucked out their coelomic fluid. Then, we collected a few spines. After cutting the poor animal open, we also took a piece of their intestines and a piece of gonad.

Late at night I made it back to the hotel and passed out pretty soon. The next day I went back to Naos and had more time to talk to Harilaos. He showed me all their facilities and how to keep urchins and crabs in tanks. Later that day he introduced me to Alexandra Hiller, a collaborator who works on Porcellanidae. We talked for several hours and she told me some fascinating stories. I got lots of ideas.

That night we went to see Dumas, a Panamanian friend who was in my PhD cohort at Lausanne University. He and his wife Emilie (jurasienne) have a nice little house in Paraiso. We stayed until late and talked. Linnea fell in love with Emilie. We played with their two dogs (Chocolate and Dubois – or something similar) and hung out in their hammock. 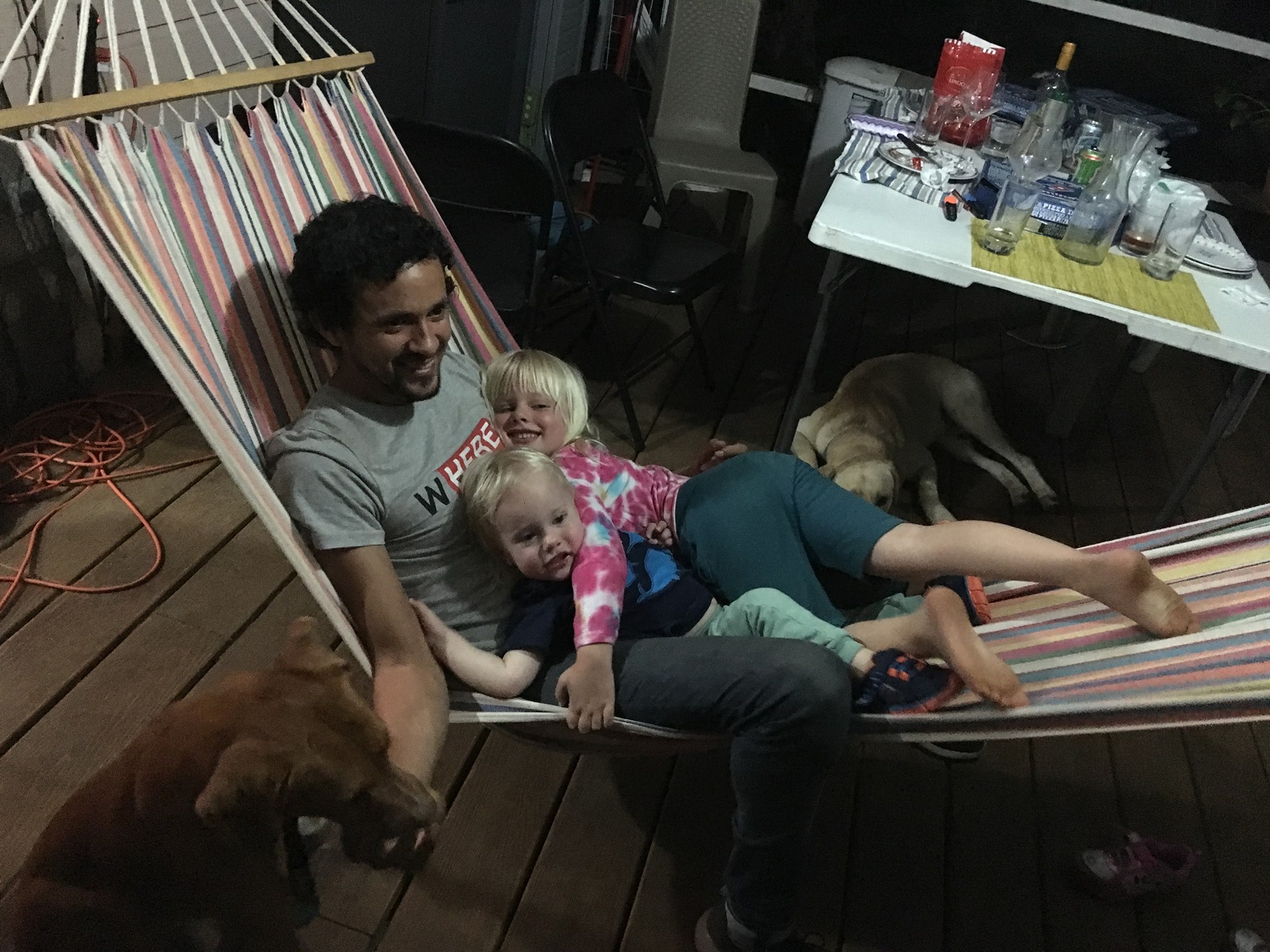 The next morning, we got picked up early and drove to the jungle of Gamboa. Our guide Carl (the owner of the Jungle Land Panama Ecolodge) drove us on a boat along the Panama Canal. He enjoys talking. We took several side rivers and met monkeys. Capuchin monkeys, Spider monkeys, Howler monkeys, and Cotton-top tamarin monkeys. Carl goes and feeds them every day, so they recognize him and jump on the boat when he shows up. Not sure what I should think about it. The French-Canadian tourists with flip flops and beers on our boat definitely enjoyed it.

The canal is pretty impressive. They are constantly dredging and making it wider and bigger. Some of their cranes are from Germany from post-war times.

2000 containers of toys, cars, crap from Asia to Europe… 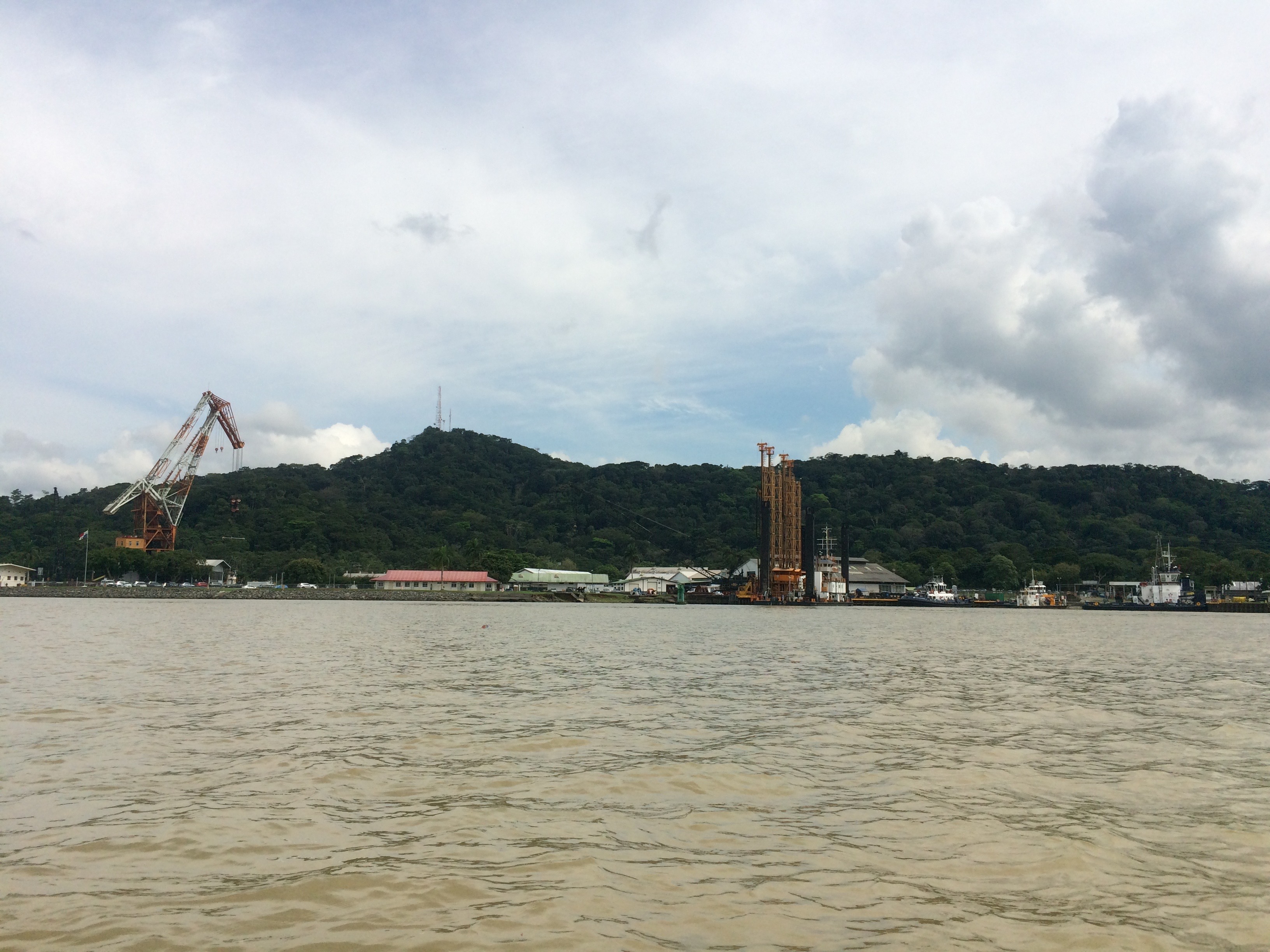 Then we arrived at the lodge. It is a wild and fantastic place!!! 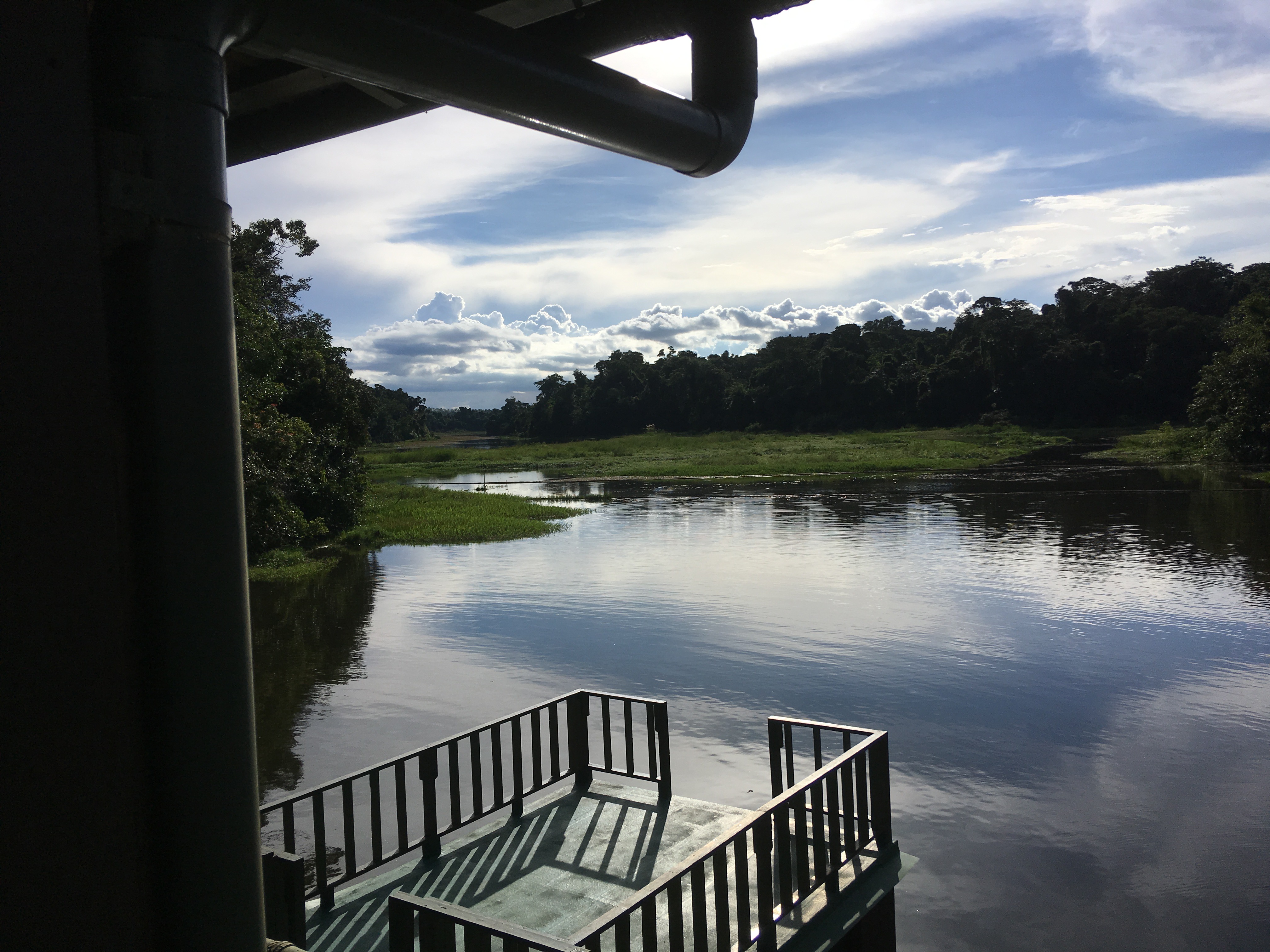 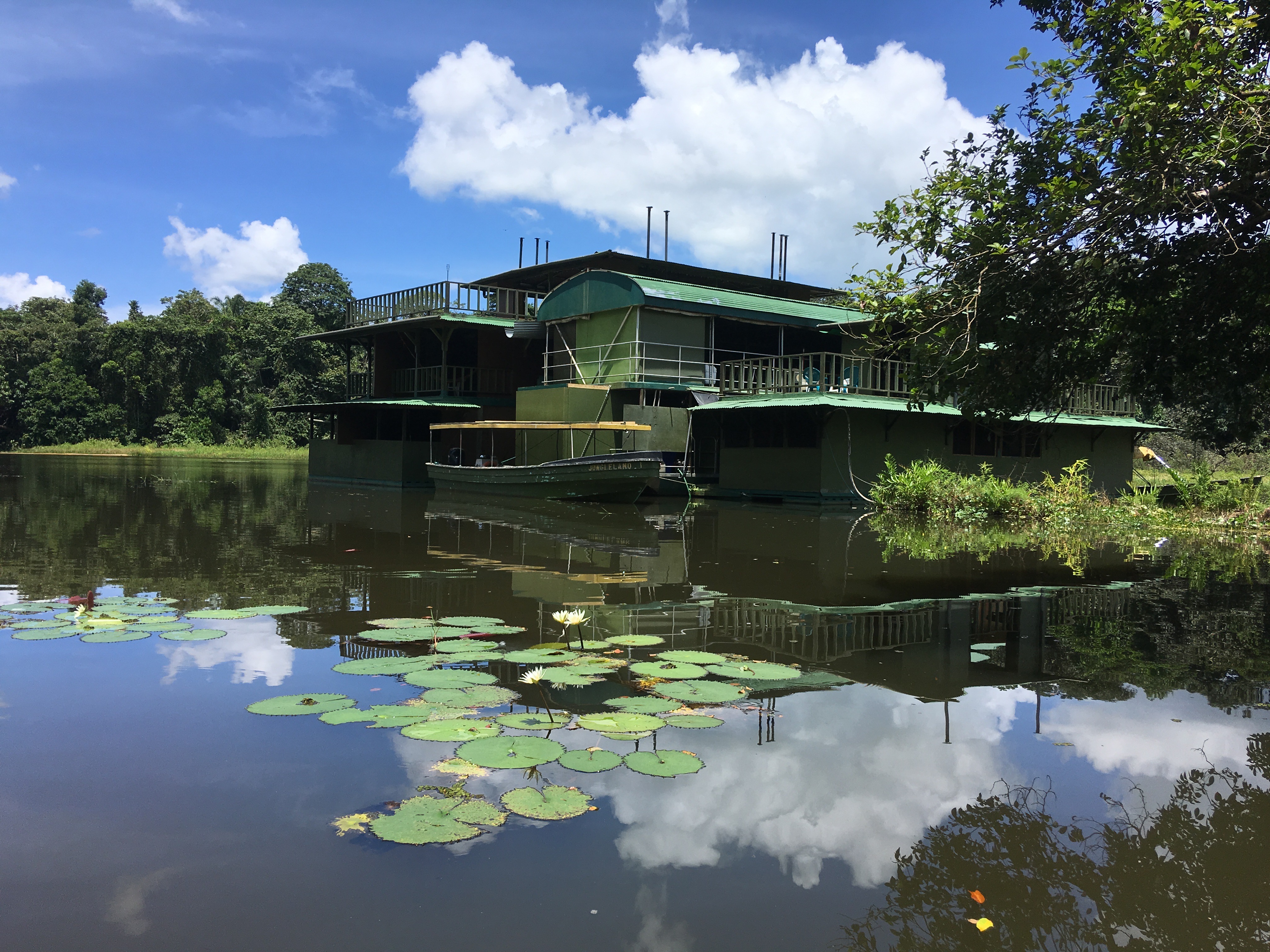 After a rich lunch, Linnea and I went kayaking while Donny and Jacoby took a little nap. Linnea is a great companion! She told me everything she knows about the jungle. We left the kayaks and took a little hike to a waterfall. I jumped down and Linnea was a bit jealous. I promised we could come back when she is a bit older and can jump too. She was sitting in the water and waiting for me until the little minnows started nibbling on her.

We stayed overnight at the lodge. I went swimming with Jacoby and we enjoyed all the night creatures. Linnea sat on the balcony at dark and looked at the bats. There were lots of them. During the day, we saw a lot of birds. However, I do not know them all by name. I am not a passionate birder. I recognized the Brown pelican, Snail Kites, Purple Marten, some swifts, hummingbirds,

On Thursday, we traveled back to the big city of Panama. On the way, we saw a sloth. People here like to take them down from the trees so that tourists can take pictures of them. That is pretty sad. It costs them a lot of energy to climb back up the trees. Their diet is not very nutrient rich and they need to save their energy!

I don’t even want to start writing about the sad Boa constrictor that is living with Carl. She does not live a very happy life.

On my last day I saw Alexandra one more time and we talked crabs.

Panama is beautiful. There is such a rich life here. Most people I met were very nice. However, it is also very complicated. Last night I went to a bar alone. I ordered a beer and a sandwich. The bartender told me that I was absolutely crazy to walk alone into a bar without speaking Spanish and being a white lady. It confuses me that I do not know the rules here in Panama. Three people pointed out that I am white during my trip. I do not fully understand what is going on. I am motivated to learn Spanish and I think it will help. However, as blond as I am, I think I will never be taken seriously in Panama. I find this pretty racist. I am feeding a family of four with a postdoc salary. My computer was stolen two weeks ago. I have almost no money left and still I got charged ten times more than locals. A weird feeling. Tomorrow we are flying to Florida for the weekend before returning back to California.

We saw alligators in the Everglades and I found a dead Porcellanid during snorkeling at Bill Baggs State Park in Key Biscayne while Donny took care of the last Baseball moves on my phone. This is called convenience.